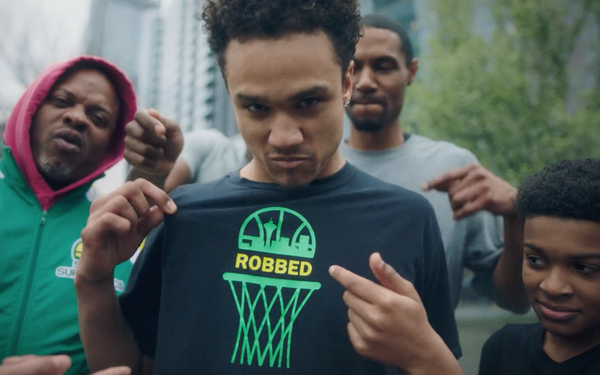 It’s been 10 years since the NBA's SuperSonics left Seattle, when the abrupt relocation of the 41-year franchise to Oklahoma City left fans “stunned and broken-hearted,” including those at World Famous, an independent ad agency.

While some cities might have moved on by now, for Seattle the SuperSonics are “much more than just a team, they’re intrinsic to the fabric of the community,” according to Chris Volckmann of Unheard/Of, World Famous’ sister company and live-action arm.

Volckmann directed a “fan celebration film” that is part of  Bring ‘Em Back, a grassroots cross-media campaign conceived by World Famous.

The film combines the “gilded memories of the rich history of Seattle basketball with the shining promise of the future, “ Volckmann says.

With an emphasis on creative storytelling, the agency set out to unite and celebrate a fan base that, despite it all, is still as passionate about Sonics basketball as ever.

Fans are invited to connect with one another and share their memories by posting a photo or video on Instagram with the hashtag #mysonicsstory. By posting recollections about say, their first game or their favorite players, fans can share what the Sonics mean to Seattle as a community, Volckmann says.

“What really drove us to start this campaign were the fans and how the Sonics are still so beloved and talked about in Seattle,” Volckmann tells Marketing Daily. “It’s almost as if they didn’t leave, when you think about how many jerseys and other merch you see on the street, or how much you still see them talked about on social media.”

When the topic of the Sonics comes up, both nationally and even locally, the conversation is often very political, he says.

“What gets lost in the fray is the individual fan, their stories, connections and relationships,” Volckmann says. “We wanted to celebrate the fans that are, incredibly, still just as passionate now as ever—and let their collective voice provide an emotional statement that Seattle deserves its team back.”

The campaign will live on the website “counting down the days until the team is back,” he says. “We’ll continue to run the social accounts as well to continue to tell individual stories. We have a few other extension ideas in the works as well.”