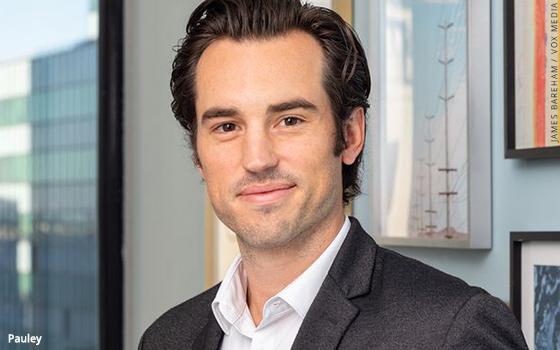 During his eight years with Vox Media, Pauley led the 2016 conceptualization and launch of the company’s ad marketplace Concert and its expansion across media, including partnerships with Quartz, New York Media, PopSugar and Rolling Stone. Most recently, the Chicago-Sun Times joined as its first premium newspaper partner.

Pauley told Publishers Daily Concert will continue to be a primary focus for the revenue team.

“As Concert grows, we are learning more about the power it holds for our clients and partners,” said Pauley. “We are looking to add a senior person to lead strategy across our programmatic and concert businesses, because we are committed to driving innovation and growth through a combination of scale and creativity.”

Pauley is joined by two colleagues moving into new roles at Vox Media; both will work on his team.

Regina Zaremba will serve as Pauley’s chief of staf-head of operations at Vox Media, a new role at the company. Zaremba has also worked closely with Pauley on Concert. As head of operations, Zaremba will head operational functions in the revenue organization, including training, enablement and special projects.

“I have seen the company grow immensely. I’ve played a role across almost all of the functions in the revenue organization during my tenure, so I deeply understand the ins and outs of our business,” Pauley said. “I plan to use everything that I've learned to make our customers smarter and help their businesses thrive.”

Separately, Tim Grieve, vice president, news, McClatchy, announced Friday  he was departing the company and moving to a “new venture in the media space,” he stated. He will leave the company following the November 6 midterm elections.

Grieve heads the company’s newsrooms and news strategies. He assumed that role in 2016, after a long history with the company. He began as a reporter for The Sacramento Bee.

In the interim, Andrew Pergam, vice president, video and new ventures, will oversee some portions of news operations at the company, such as real-time news and the reinvention team.