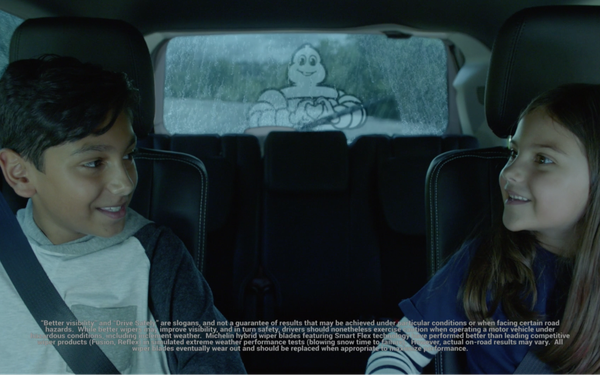 Pylon Manufacturing is equating the way wiper Michelin-brand blades grip the windshield to a hug from the iconic Bibendum mascot, also known as the Michelin Man.

The creative draws upon consumer familiarity with the iconic Michelin Man “hug” to inspire a sense of safety and security. The blades “hug your windshield like our tires hug the road.” The campaign aims to raise overall awareness for Michelin Wiper Blades as a premium choice for drivers who value safety and performance.

Mike Fretwell, chief marketing officer of Pylon, declined to comment on spending for the campaign.

“This campaign is a significant investment for the company in supporting this brand and its wiper blades,” Fretwell tells Marketing Daily. “Our products are designed for drivers of all ages who are concerned about performance and safety.”

This is Pylon’s third year partnering with both Tattoo and Harmelin, he says.

“Prior to the new Michelin ‘Hugs’ commercial, the Michelin Wiper Blades commercials were in an animated style from 2013 to 2017,” he says.

Michelin wiper blades are available across the U.S. and Canada at auto stores and major retailers. Pylon has manufactured and marketed wiper blades for 50 years and under the Michelin brand since 2003.