Is Creative Consistency The Opposite Of Originality? 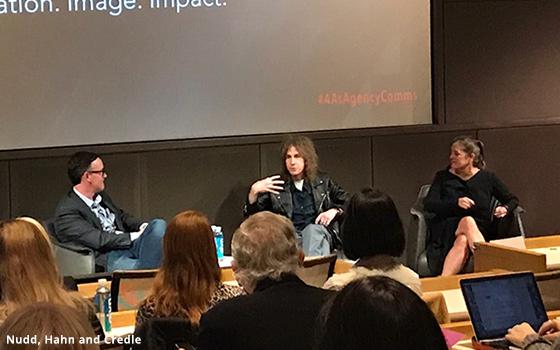 We know creativity when we see it, but talking about it is a tad more complex.

“We are trying to broaden the perspective of what BBDO does as its agency's identity,” Greg Hahn told a gathering today’s 4As Agency Communications Summit in New York.

Like other ad agency’s BBDO’s mission is to solve client problems through creativity, noted Hahn. “We are well-known for film and digital, but we are trying to evolve to become more upstream to solve any problem, including through new products and design.” He says the agency is making progress.

FCB lets the work speak for itself, but Credle thinks it is important for companies to have a voice. “You need to be consistent,” she advises. “I say the same things over and over. I think it begins to add up in thought leadership. However, it is dangerous for our industry when people say things just to be provocative.”

Still, Credle worries that consistency is the opposite of originality. “We need to treat our agency's story just as we would a brand,” she says. “We need to look at the past, present, and future. The highlights of my career weren't the big awards or one-offs, but rather building a legacy message that stood for a purpose. FCB classifies its work through the ‘4-5-6’ framework which includes the importance of developing provocative work as well as ensuring an enduring platform.”

There are too many award shows, says Credle. “I think there is a lot of manipulation. I see it happen in the jury rooms. They aren't pure,” she says. That said, she does admit that trophies help attract talent.

The hardest list to make is the award show short-list, they say. Hahn notes there is a growing discussion over the difference between award-winning work and what clients want, similar to the Academy Awards' debate over obscure independents and blockbusters. It shouldn't be one or the other, says Hahn, though he admits it makes it easier for work to make it through the first-round if it is familiar.

Both creatives, to that end, think it is brilliant that Leo Burnett proactively publishes an annual Cannes prediction list as a way to attract hype for the agency as well as lead the conversation over what constitutes award-winning work.
agency, conferences, creative
Next story loading