Getting Out The Vote: Female Stars Reach Out To Women, 'Pop-Up Experience' Lures Millennials 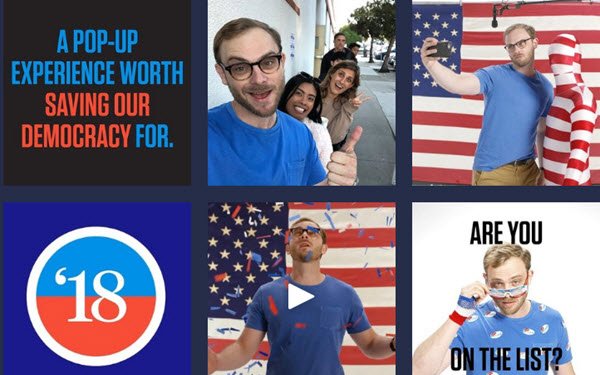 With only a week to go before what many consider to be among the highest-stakes U.S. midterm elections in history, new “get out the vote” campaigns are popping up more frequently.

Two that are just launching are notable for targeting women and millennials — and for using stars/influencers and satiric humor, respectively, to engage those groups.

One new ad, “Because It Matters,” was produced by Mike Bloomberg and RadicalMedia and directed by actor/director Jodie Foster.

Most of those featured in the 60-second digital ad — which will be running on national websites and social media channels, as well as in specific regions with competitive races — are female stars of traditional or social media.

The messaging doesn’t mention specific candidates or political parties. Instead, it has Leoni — best known now for her portrayal of a fictional U.S. secretary of state on the TV series “Madam Secretary” — asking viewers, “If somebody asked you what you care about, what would you say?”

She is followed by various stars, each asking viewers whether they care about specific issues such as health care, equal pay, equal rights, LGBTQ rights, human rights, gun safety and reform, freedom of the press and speech, climate change, immigration and more. If so, say the women, “Don’t lose hope — vote. Vote as if it matters, because it does.”

On-screen messaging at the end states that the ad is funded by Independence USA PAC and IndependenceUSAPAC.org, and the website states that the PAC is “a Mike Bloomberg-funded effort to support candidates and referenda in local, state and federal races across the country, with a focus on issues including gun laws, the environment and education policy.”

Bloomberg, of course, famously pledged to spend $110 million to help Democrats win the House and the Senate, and recently re-registered as a Democrat — both of which have led to speculation that he plans to run for president in 2020.

“We hope that this campaign, featuring familiar faces in the entertainment industry, will inspire others to share their views and more importantly, take action on Election Day — because it matters,” stated Foster.

The new campaign aimed at getting millennials to vote comes from Gold Front, a San Francisco-based creative studio.

The new campaign aimed at getting millennials to vote, called “Museum of Voting,” comes from Gold Front, a San Francisco-based creative studio.

“Some friends and I are launching this campaign in an attempt to do something, anything, to improve millennial voters' low turnout,” says Josh Lowman, a writer and creative director at the studio. “No brands are part of this — it’s self-funded, and from the heart.”

The playfully satirical creative teases millennials, using humor — and positioning voting as an amazing combination of all of their favorite things (summarized visually above) — to get them to drop lame excuses and go to the polls.

The host of the 2-minute video declares: “I’m a millennial, and that means my ideas are important and need to be heard… November 6 is Election Day, but most millennials say they don’t have the time.” A vignette of a guy claiming he can’t vote because he’s DJ-ing a brunch follows.

The host continues: “What does our generation love more than anything else? Instagram traps — pop-up experiences, social media love. So look at it this way: Voting isn’t just about saving our democracy; it’s the world’s most epic pop-up experience. And on November 6, it’s going to be blowing up everyone’s feed…”

The remainder of the video offers footage of the host at a polling place.

“Welcome to the Museum of Voting,” he says. “Or, if you like, the Voting Factory. Or the Happy Voting Place. Whatever the fxxx you want to call it, it’s an exclusive, one-day opportunity to do all the things we love. Like tweeting about how excited we are to do the thing we’re in line for. Or being on a list. The Museum of Voting is strictly VIP.” (A poll monitor corrects him: “That’s not true. Any American citizen over the age of 18 can vote, unless you’re a convicted felon.” Whereupon a nearby African-American voter chimes in with an observation about suppression of voting by blacks in some states.)

So what more could a millennial want? The video offers the kicker: stickers.

Not surprisingly, given it has no outside funding, Lowman reports that the campaign includes no paid media.

“We’re pursuing a viral/earned media strategy, using our trailer video on Facebook to drive traffic to the campaign site and the main video,” he tells Marketing Daily. “We’re going out to Facebook and a few influencers today. We’ll see what happens.”