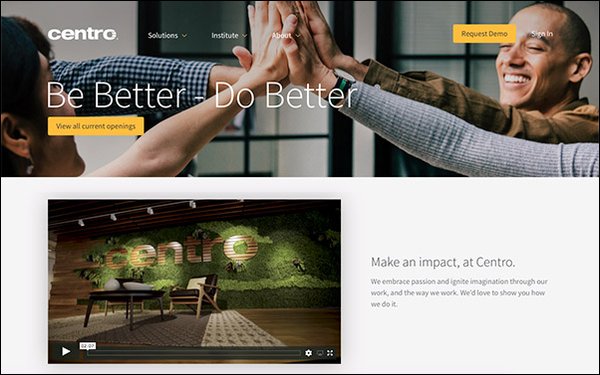 Centro has signed on 100 agencies for self-serve software contracts in the first three quarters of 2018. The growth has promoted the company to budget between 140 and 150 employees to the payroll in 2019.

About 649 employees support Centro’s business. “The company budgeted to hire up to 150 employees by the end of 2019,” he said. “The majority of investment will focus on growing its product, engineering, data science, sales and service teams.”

Most of Centro’s clients are regional, independent agencies that need complete business solutions, from front-end to back-office services. More than 90% are U.S. based, but Centro also has clients in Canada, Mexico, South America, and Europe.

Agencies don’t want to work with independent, siloed teams. The trend is to have media-buying functions, analysis and financial reconciliation that work together.

Riegsecker said the integrations work in slightly different ways, depending on the media required for the campaign. For ad servers, it’s a bidirectional integration where Basis automatically creates and sends the campaign information to the ad server along with tracking instructions. It then pulls the ad-serving data back into Basis.

For search and social media, the platform retrieves all of the performance data in real-time and presents it in a dashboard alongside the DSP and direct buying data, so the user has a complete view of the entire campaign.

Since the platform also integrates with Facebook, Instagram, Sizmek, Google Marketing Platform, Google Ads Manager, and YouTube, the biggest challenge in 2018 came from merging Centro’s separate programmatic and digital media-buying teams into one.

The second significant challenge was to retrain its entire sales team or more than 100 sellers to learn how to sell software. Most of Centro’s sales team had never sold software in their careers. Rather than build a separate software sales team, the company decided early on to invest in retraining its sales force.

Riegsecker declined to disclose the privately held company’s annual revenue, but did say Centro “surpassed $100 million in net revenue in 2016 and our growth rate has continued to accelerate over the past two years.”

In 2019, the company will focus on improving its social and search integrations, as well as its addressable and CTV/OTT capabilities.