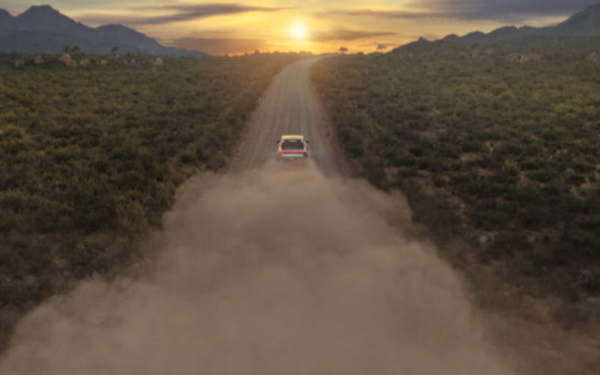 Rivian, which bills itself as the world’s first electric adventure vehicle, enlisted Droga5 to complete a just-released teaser video.

The agency is also working on other creative for the new automaker. The vehicles won’t be available for sale until 2020, although the public is getting the first look at the revolutionary products at the Los Angeles auto show next week.

Besides Droga5, the company is working with Instagram photographer and influencer Ben Moon on a series showing the vehicle in beautiful outdoor locations.

The 57-second video can be seen on the company’s social media pages. “The Electric Adventure Begins” depicts a person trapped inside the noise and pressure of modern-day urban life. His surroundings intensify until he is able to break free into nature behind the wheel of a Rivian, leaving behind it a trail of dust as the driver, now enjoying the silence of electric drive, heads into the sunset.

Accompanying the video is a still image depicting an aerial view of the R1T full-size pickup truck.

The company shared the video on its Instagram page with the caption: “Catch the first glimpse of our all-electric R1T truck and join us as we launch into space. By space, we mean the world around us, not beyond us. There’s more out there and our vehicles are designed to bring you back down to Earth and lead you further into nature than ever before.”

Media were invited to the company’s headquarters in Plymouth, Mich. (about 25 miles west of Detroit, not far from Ann Arbor) last week for a sneak peek.

I can’t reveal details about the vehicles until an embargo lifts next week, but I think it’s fair to say this will be something never seen before in the auto industry. The vehicles are like Tesla meets Jeep.

The company doesn’t really consider Tesla a competitor and is going after a completely different segment of the market, one occupied by Land Rover.

But unlike Land Rover, the vehicles are all-electric. The company’s first models — the pickup truck and an SUV called the R1S — are made to get dirty, to go to remote places. The company envisions having branded charging stations at places like Joshua Tree National Park and Lake Tahoe.

There’s a joke among the automotive press about customers who supposedly have “active lifestyles.” But the folks who drive a Rivian really will.

One of its Instagram photos shows a closeup of the Rivian nameplate on a vehicle covered with mud and water splatters. The yellow that encases the vehicle name and its logo is a vibrant shade (Pantone 7549 C) the company calls “gold fusion,” which resembles a color found in early dawn, says Jiten Behl, Rivian’s chief strategy officer.

The name Rivian is derived from Indian River, the estuary that ran through founder RJ Scaringe’s childhood backyard in Florida. The company’s logo is an interpretation of a compass, suggesting the North, South, East, and West of adventure.

“We are all born adventurers,” Scaringe says. “We are all born looking to explore, to see new things, to learn new things. And that’s really what we are building Rivian as a brand for, to help enable those new experiences.”

The automaker is promising impressive on- and off-road performance figures and class-leading specifications including range, power, torque and off-road articulation. “These vehicles are set to demonstrate that electric vehicle technology is now able to deliver durable, long-range on- and off-road capability to consumers,” Scaringe says.

Scaringe, an MIT engineering Ph.D. graduate, is extraordinarily articulate and passionate about his company, which he founded in 2009 when he was just 26 years old. He also seems down-to-earth. These are good qualities to have in a leader. And he understands the language of marketing.

He laid out the company’s brand positioning in an interesting way. Imagine a horizontal line with “commodity” at one end and “aspirational” at the other end. All vehicles, really all products, fall somewhere on that continuum, mostly in the middle. Now imagine a vertical line dissecting that first line with “invitational” at the top and “presentational” at the bottom. “Invitational” implies they are designed to be used and to be functional, vs. “presentationa,l” where the emphasis is more on aesthetics.

There are very few auto brands that have sharp positions, so Scaringe uses examples of clothing brands in the four quadrants of the chart, where the differences in positions are much clearer.

If you look at four major clothing brands, you could place Hanes in the top left box and Patagonia in the top right box. Men’s Wearhouse would be in the lower left box under Hanes while Armani would be in the lower right box under Patagonia. Which is to say that while Hanes and Men’s Wearhouse are both on the commodity side of the spectrum, they are used for different purposes. Hanes is more of a practical basic while Men’s Wearhouse sells suits, and therefore is geared more toward making an impression, toward image. But it’s at the other end of the spectrum from the flashy aspirational quality of the Armani suit. Patagonia, like Hanes, is action-oriented, but it has more panache and is more aspirational than the basic brand.

Rivian, as a brand, is in the box with Patagonia, along with Land Rover, while Tesla would be beneath it in the Armani box, along with other upscale auto brands like Porsche, BMW, Mercedes-Benz, Jaguar and Audi.

But Rivian is different from Tesla and other aspirational vehicles. It has another dimension that differentiates it from most of the other luxury brands.

“Tesla has done an exceptional job of redefining what we think of as the traditional luxury segment,” Scaringe says.

But unlike Tesla, Rivian will offer the type of vehicle that you want to take your family to the beach in, and will have a functional interior that can handle all of that sand.

“It’s a product that challenges expectations of what an electric vehicle can do,” he says. “Can it go off-road? Can it get wet? We have to dispel the untruths that a vehicle like this can’t do that. It has to be usable on an everyday basis, it has to be efficient.”

Besides being practical, Rivian vehicles also will be ethical, strategy officer Behl says. It will feel much more satisfying to have an outdoor adventure knowing you aren’t doing it in a gas-guzzling, natural-resource-depleting vehicle, he says.

It’s hard to argue with that logic. There’s definitely more news to come out of Rivian, so stay tuned.