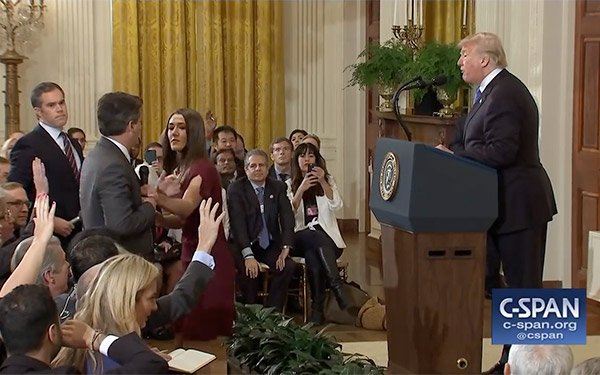 The Trump administration on Monday dropped its attempt to revoke the press credentials of CNN reporter Jim Acosta.

The move came three days after a federal judge ordered the White House to temporarily restore Acosta's press pass. But the administration also told White House press correspondents on Monday that they are expected to follow written rules of "decorum," including a rule requiring them to yield the floor after asking a single question. Reporters who break the new rules could have their credentials suspended or revoked, the White House warned.

The White House's decision to settle the matter brings an end to a dispute that erupted soon after a contentious November 7 press conference. At that event, Acosta questioned President Trump about his pre-midterm election statements characterizing a “caravan” of migrants traveling north from Central America as an “invasion.”

Press Secretary Sarah Sanders initially justified the decision by posting a video that supposedly showed Acosta "placing his hands" on the staffer who had tried to take away the microphone. But that clip had been altered to make Acosta's actions seem physically aggressive: The un-doctored clip shows Acosta trying to hold onto the microphone as the staffer tried to physically grab it.

CNN and Acosta alleged in a lawsuit filed last week that the revocation violated their First Amendment right to freedom of speech as well as their Fifth Amendment right to due process of law. They officially withdrew that suit Monday evening, after the White House said it would restore Acosta's press pass.

On Friday morning, U.S. District Court Judge Timothy Kelly in the District of Columbia -- a Trump appointee -- said the White House failed to give Acosta due process of law when it summarily revoked his credentials after a contentious November 7 press conference.

Kelly said that prior precedent requires the government to “provide Mr. Acosta due process” -- including “notice, an opportunity to rebut the government's reasons and a written decision.”

“I do hold that plaintiffs have demonstrated a likelihood of success on their claim that adequate process was not provided to Mr. Acosta,” Kelly said. “Whatever process occurred within the government is still so shrouded in mystery that the government could not tell me at oral argument who made the initial decision to revoke Mr. Acosta's press pass.”