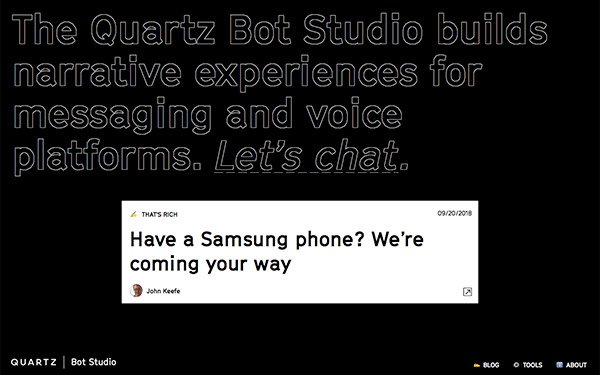 is expanding its work with bots and artificial intelligence with the launch of the Quartz AI Studio. The studio will work to help journalists at Quartzand other news outlets use machine learning to report their stories.

John Keefe, initially hired to lead the Bot Studio, will now work with both studios under a new title: technical architect for bots and machine learning.

That can range from document sorting to Quartz's custom code, he said.

Stories reported using computer algorithms tend to come from large newsrooms with in-house programmers, according to a Quartz statement.

Quartz wants to collaborate with other news organizations for at least half of its published stories from the AI Studio. Italso plans to add some artificial intelligence to Quackbot, its free Slack bot for journalists.

Quartz, the business news outlet launched by The Atlantic back in 2012, was acquired by Japanese Company Uzabase this summer.
journalism, machine learning, online publishing
Next story loading