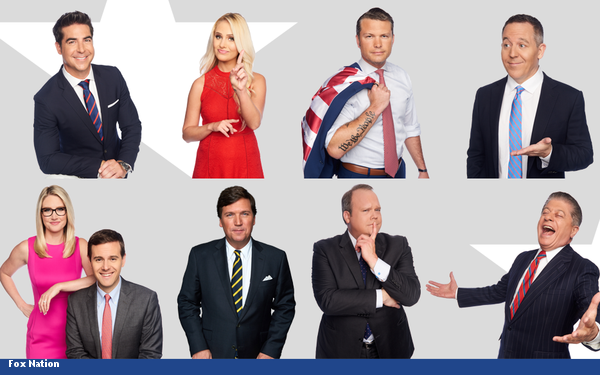 It will even air the occasional cooking or quiz show.

At launch, Fox Nation will not include advertising. When the service does get advertising, it will likely follow the path of other OTT services, with a focus on sponsorships or limited advertising formats, rather than commercial breaks.

The challenge for Fox News is creating an OTT product that is differentiated from the linear cable channel and the streaming competition. To do so, Fox Nation will utilize a content model that blends linear with on-demand. There will be live shows and a linear feed, but executives expect much of the programming to be consumed on-demand.

“We wanted it to be different from an OTT service people might be able to get somewhere else,” John Finley, senior vice president, development and production for Fox News tells Digital News Daily. All shows will be available on-demand; users can get push notifications for new episodes of their favorites.

“We are trying not to compete with or cannibalize the Fox News audience,” Finley adds. “Obviously it is designed for the Fox super-fan.”

Streaming video also gives programmers a freedom that linear TV doesn't provide. The Fox News cable channel is limited to 24 hours a day, one program at a time. Fox Nation may release multiple shows or episodes at once, some five minutes long, others 15 minutes, 45 minutes or 90 minutes.

In addition to daily political programming, Fox has a cooking show hosted by Steve Doocy, a nightly quiz show, and a slate of history and documentary programming in the pipeline.

“We already have plans to add more shows to the schedule as early as the new year,” Finley says, adding that 90% of the programming will be exclusive to the streaming service.

That does not mean Fox Nation will never compete with the TV channel. Finley plans to do some live-event coverage to supplement the daily programming. Fox News tested the idea out in an election-night special that ran on YouTube and Facebook.

“The trick is doing that in a way that doesn’t necessarily compete with the news channel or business channel coverage,” he adds.

With regard to distribution, Fox Nation will eventually find its way to third-party distributors. Amazon has had success with its Amazon Channels offering, and Apple is said to be pursuing a similar service. Streaming bundles like YouTube TV and Sling TV offer some streaming services as add-ons to their existing bundles.

“At launch, we are planning to only sell directly to consumers,” says John Fiedler,  senior vice president, digital for Fox News tells Digital News Daily. “However, we are also actively involved in conversations with other third-party platforms for potential distribution.”

Over the past couple of weeks, Fox News has started selling the service to consumers with what it calls “Founders” subscriptions. The minimum buy-in is $60 for a one-year subscription to Fox Nation (which includes a limited-edition coin), with the tiers rising to a $1,200 package that includes a three-year subscription, a tactical watch, a rocks glass set and a medal.

Finley declined to share how many people have signed on as Founders, though he was “surprised by the number of people who bought the $1,200 tac-watch tier.”

“It gives us a great deal more optimism for when the normal SKUs become available, because for the Founders program, it has been a much higher threshold, committing to at least a year at $60, while the month-to-month option doesn’t become available until launch,” Finley says.

Ultimately, Fox Nation is trying to accomplish something similar to what Fox News did when it launched in 1996. At the time, news channels were not generally focused on opinion or political commentary, and the TV landscape was dominated by entertainment and sports.