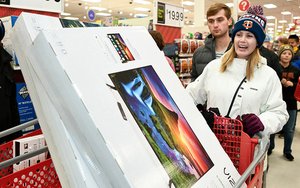 Propelled by a sturdy economy, Americans shopped plenty on Black Friday, despite reports that fewer feet traipsed through malls. And experts say the results reflect consumers’ shifting perception about the year’s biggest shopping event: They know Black Friday isn’t going away. But they’re so confident they’ll always be able to find a good deal, why get out of bed at dawn if they don’t have to?

While the International Center of Shopping Centers says it believes 151 million people shopped on Thursday and Friday, an increase from last year’s 145 million, ShopperTrak reported a 1.7% decline in traffic on Black Friday. When looking at the combined results of Thanksgiving/Black Friday period, the dip was just 1%.

At a higher-end mall in Atlanta, “traffic was very low, and that run toward the doors as they open just wasn’t happening,” says Kerri Sapp, senior manager in Deloitte’s retail practice. “But by 9 a.m., while the lines weren’t excessively long, they were healthy.”

Yet at a mass merchandiser in rural Tennessee, where Frank Layo, managing director at Kurt Salmon, part of Accenture Strategy, watched the day unfold, lines were forming by 2:30 on Thanksgiving afternoon. “People were camping out, hoping to get deals on doorbusters like hot pots and bedding,” he says. “There was some good old-fashioned pandemonium.”

“We’re at an inflection point for Black Friday,” Sapp tells Marketing Daily. “If you’re chasing that doorbuster — the big-screen TVs for half off, with the store selling just 10 of them, for example — you’ll be there. But for everyone else, there’s no hurry. They know they’ll find a deal somewhere.”

Overall, though, just how many feet trot through a store seems to matter less. “Store traffic has been flat to down for a long time,” says Sucharita Kodali, vice president and principal analyst covering e-commerce for Forrester. “Conversion and sales are all that matter.”

As metrics go, traffic is “pretty much dead to retailers,” agrees Layo. “Of course, it is important how many people find the brand meaningful enough to come into the store. But retailers are now becoming more concerned about the lifetime value of customers.”

The ICSC finds that brick-and-mortar stores that have invested in a smooth online shopping process are reaping rewards, with 88% of the weekend’s purchases made at stores with omnichannel offerings. And some 27% used click-and-collect options, with 64% of those people making additional in-store purchases when they came to retrieve their order.

One pronounced change is that retailers are promoting deals well before Thanksgiving. “Stores have to be sending those emails out earlier, because we know people who shop earlier spend more,” Sapp says. “If you’re not reaching them before Thanksgiving, you’ll miss them.”

And Layo adds that chains are also blurring the edges of Cyber Monday, stretching it out into a Cyber Week event. “So what does that do to expectations? And how does that distort the rest of the shopping results?”