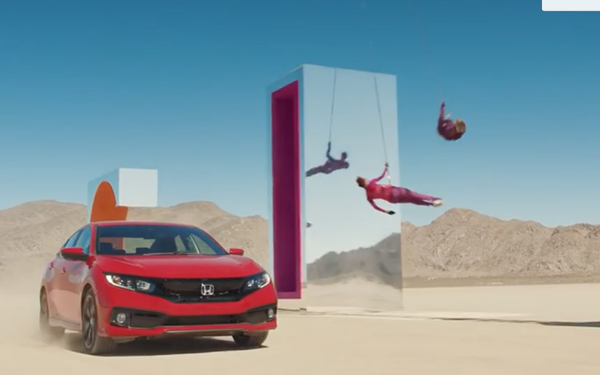 Honda is launching a campaign for one of its stalwart vehicles that features the “Civic” nameplate as a palindrome.

The creative, from RPA, aims to demonstrate that the redesigned vehicle is fun forward, backward, inside and out.  The Civic also will be integrated into digital gaming program to reach millennials.

In a 30-second spot, the Civic is shown as it takes a journey around giant three-dimensional letters forming its own name. Upon reaching the last “C,” Civic begins driving in reverse, precisely mimicking its forward path. The cinematic palindrome features several stunt artists performing flipping, dancing and skateboarding tricks around each letter, that they, too, perform in reverse.

Civic also will be integrated into a digital gaming program to reach a millennial audience and align with the target customer’s passion for gaming. To reach this highly mobile and social-savvy target, the use of video ads will engage the younger audience through social posts on Facebook and Instagram.

The Civic print ads will be featured in enthusiast publications, including Autoweek, Motor Trend, Road & Track and Car and Driver. The campaign will also leverage artists from Season 5 of Honda Stage to align with the young and trend-centric spirit of the Civic audience.

Unlike General Motors, Ford and Fiat Chrysler--which have been killing off car models left and right--the Civic isn’t going anywhere, according to the automaker.

“Civic continues to top all cars in retail sales, so we are keeping our foot on the gas, with styling and technology upgrades to offer Honda customers even more Civic fun,” said Susie Rossick, assistant vice president of Honda marketing, in a statement.

“Our new campaign was created to tell consumers they will have fun in Civic regardless of their direction.”