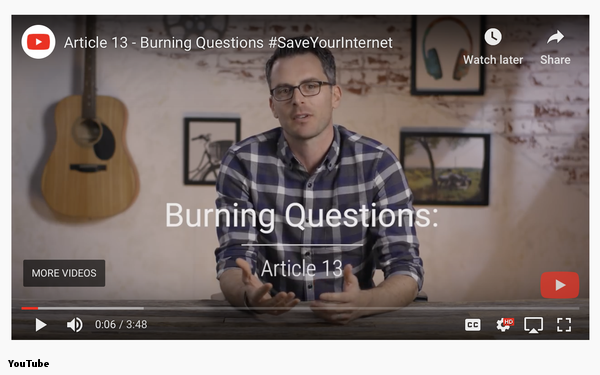 YouTube is escalating its war of words against Article 13, the proposed European Union copyright regulation.

This week the company is launching a campaign, called “#SaveYourInternet,” in an attempt to sway public opinion and convince EU authorities to tweak the language in the legislation.

YouTube is leveraging what is arguably its strongest asset: the community of video creators who use the platform.

The YouTube Creator Academy, which provide best practices and advice to creators on the platform, released a video in which Matt Kovalakides, manager of content strategy and production for YouTube Scaled Education, explains Article 13 and the company’s position on the matter, before asking the creator community to take an active role in fighting the legislation.

"It is important that policymakers hear and see that real people will be negatively impacted if Article 13 goes into effect as written by the Parliament,” Kovalakides says, asking YouTube creators to make videos about Article 13, and to tweet using the hashtag #SaveYourInternet. "We need you and your fans to make your voice heard now.”

YouTube argues that if Article 13 is enacted as written, it will be forced to take down most videos uploaded by creators in Europe, and prevent new uploads unless users can prove they own the rights to everything in their videos, including visuals and sounds.

The campaign by YouTube is the latest move by the Google-owned company to fight Article 13.

In October, YouTube CEO Susan Wojcicki wrote a blog post that outlined the company’s concerns with Article 13. Earlier this month, she elaborated on those concerns in a Financial Times op-ed.

And on its Save Your Internet page, YouTube highlights videos from popular creators like Phil de Franco and WillWoosh warning their viewers about the legislation.