Tide's Loads Of Hope At Wildfires: Clean Clothes Give Victims 'A Lift' 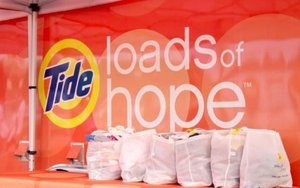 It’s possible, in a day or two, that a reader will have to look harder to find stories about the Camp Fire disaster in California. Finally, that fire has been contained after the Woolsey Fire was contained on Thanksgiving eve.

So for Ben Williams, the disaster relief coordinator for humanitarian aid organization Matthew 25: Ministries, it will soon be time for him to be packing up. Probably after this weekend, since right now “there’s still demand for us.”

Williams is not a minister. He is, instead, in charge of Tide detergent’s Loads of Hope mobile laundry unit, which offers victims of disasters who have lost everything they own a simple joy: the ability to clean their clothes, if they even have any left.

Cynics of cause marketing might question whether fresh clothes are a big deal to victims of the California fires. But Williams is unequivocal: “Clean clothes really have an impact on these people. These are people who have been living in their cars or living in shelters. Clean clothes really gives them a lift.”

The ministries’ relationship with the P&G brand’s trucks has existed since 2015. Counting all the other disasters he and his aides have attended to this year Williams can now report that as of Tuesday, the two Tide trucks have washed 4,000 loads of clothes this year for victims of floods, fires, hurricanes and other sad events. One truck is near the Camp Fire, the other at the Woolsey fire in southern California. P&G says the trucks have been out for 48 days this year leading up to their arrival at the fires.

That’s a record number of loads for the time Williams and ministry have been involved, and probably a record since Tide started the disaster service in 2005.

“It does seem like the intensity of the disasters has increased in the last couple of years,” he notes -- but he's not ready to say there have more since he has gone on the road.

Williams says the ministry doesn’t proselytize on the scene. “We try to minister through our actions. We adhere to Christian principles, that we’re all called to help,” Williams says. “It’s challenging to see what people are going through. We give them a hug, a smile, a handshake. But you know, in these disaster areas, the communities become so tight-knit. It’s really cool to see.”

William's ministry also helps Cintas, at the disaster scene with donated goods. The company makes uniforms  and sells an array of office and industrial supplies,.

A couple of days ago, the Sierra Nevada Brewing Co. announced it would create the Resilience Butte County Proud IPA craft brew, with 100% of the proceeds going to help survivors there, the county that is home to the Camp Fire area. And, coordinated by Sierra Nevada, over 1,000 other craft brewers across the country joined to announce the creation of their own special versions.

Williams says area residents are starting to feel an “initial release that it’s over, for what that’s worth.” Still, “Then they begin to ask ‘What’s next?’ and they can get even more stressed than before.”

What does Willliams take away from all the disasters he’s seen?  “What you learn is that you don’t know what will happen, so you have to show your love to everybody you come in contact with each and every day.”