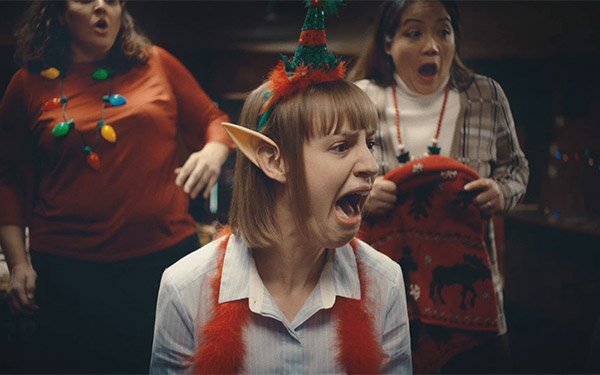 The creative, developed with mcgarrybowen Chicago, shows Curry as a holiday guest at Jibawi’s family celebration, with Jibawi playing every character, including his mom, dad and grandpa.

Maisonette’s new campaign, “A Galaxy of Gifts,” created in-house with help from freelancers, attempts to take a whimsical approach to capturing the attention of children as they build their holiday wish lists, rather than focusing on the parents (also known as the buyers).

The creative follows two extremely verbal and intelligent children as they migrate away from what they consider a boring class field trip to wander outside in the darkness, where they view and discuss the stars before the spot ends with a constellation of the e-retailer's house logo.

Concurrently, the brand has unveiled its first Out of This World holiday pop-up market open in New York City until December 24 that features a variety of family-fun activities throughout the month.

And aren’t scratch-off lottery tickets on everyone’s wish list (especially winning ones)? Missouri Lottery is out with a new effort to entice people to purchase them as gifts. The “Unfake the Joy” creative, developed with agency Barkley, shows coworkers displaying over-the-top reactions to another office mate unwrapping a snowman mug, before a voiceover suggests, “No one ever won half a million dollars from a coffee mug."

Pernod Ricard is promoting its Ruavieja in Spain by reminding people to cherish the moments they share with those they care about during the holiday season. The campaign demonstrates how surprisingly few such moments may remain for many people.

The creative, by Leo Burnett Madrid, shows loving friends and couples of all sorts who are surprised to learn how little time they may have left with each other, based on an actuarial calculating-type tool that includes a lot of factors, such as the time we waste on unessential activities. The four-minute spot features people reconnecting with loved ones before directing viewers to visit this site to do their own calculations.