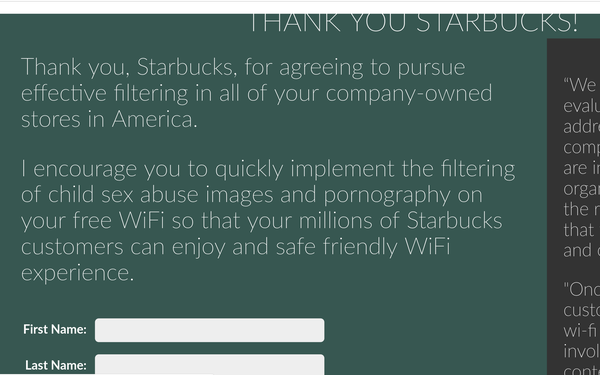 After protests dating back to 2014 and a new petition that quickly gained 26,000 signatures, Starbucks now says it will install blocking mechanisms so patrons can’t access pornography from its free WiFi.

Business Insider first reported that Starbucks will install the blocking software next year.

“While it rarely occurs, the use of Starbucks public WiFi to view illegal or egregious content is not, nor has it ever been permitted,”  the statement says. To ensure that its locations remain  “safe and welcoming to all, we have identified a solution to prevent this content from being viewed within our stores and we will begin introducing it to our U.S. locations in 2019.”

But the block never happened.

Led by its president and CEO Donna Rice Hughes, the group again put pressure on Starbucks on Monday after a new online petition, from a group called CitizenGo, quickly gained 26,000 signatures within a week.

The petition itself began, “Starbucks cares more about providing paper straws to protect the environment than protecting kids and patrons on its public WiFi!”

Enough Is Enough started in 1992, when anti-porn sentiment was particularly strong. Hughes, who became the group’s leader in 2002, was first thrust into the public spotlight in 1987 when she was seemingly the “other woman” involved with then-presidential candidate Gary Hart. A photo of her sitting on Hart’s lap hastened the end of his candidacy.