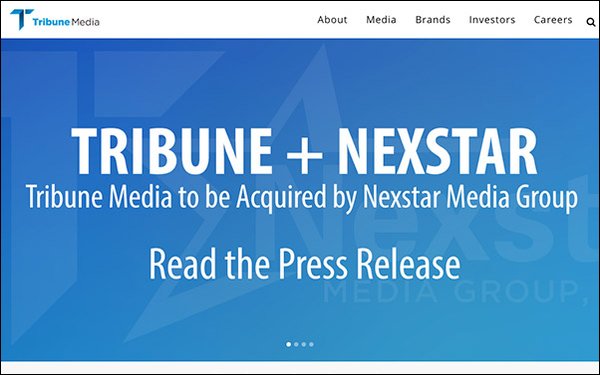 The deal will give a nearly 16% premium on the stock price that Tribune Media shareholders were paying for the company on November 30 -- $46.50 per share. The agreement also includes outstanding Tribune Media debt, which brings the total to $6.4 billion.

This comes in the wake of a failed Sinclair Broadcast Group $3.9 billion bid earlier this year, struck down by federal regulators and eventually stopped by Tribune Media in August. Sinclair announced an agreement to merge with Tribune in May 2017.

Nexstar has 174 full-power TV stations and related digital multicast signals reaching 100 markets -- nearly 39% of all U.S. TV households, which is already at the federal regulation limit for a company owning TV stations in the U.S.

Nexstar says it needs to “divest certain television stations necessary to comply with regulatory ownership limits and may also divest other assets which it deems to be non-core.”

The deal could make Nexstar the biggest owner of U.S. TV stations, topping Sinclair, which currently has 191 stations in 89 markets.

The pact beat out a number of proposed other Tribune pursuers, including a combined deal from mid-size station group Northwest Broadcasting and buyout company Apollo Global Management.

Barton Crockett, media analyst at B. Riley FBR, says the deal confirms its belief about TV stations value: “We have argued for some time that TV station groups are undervalued, and that M&A can be a road to unearthing that ...  We also see a more open road for M&A by Tegna with Nexstar now; we assume its largely out of the running for Cox stations.”