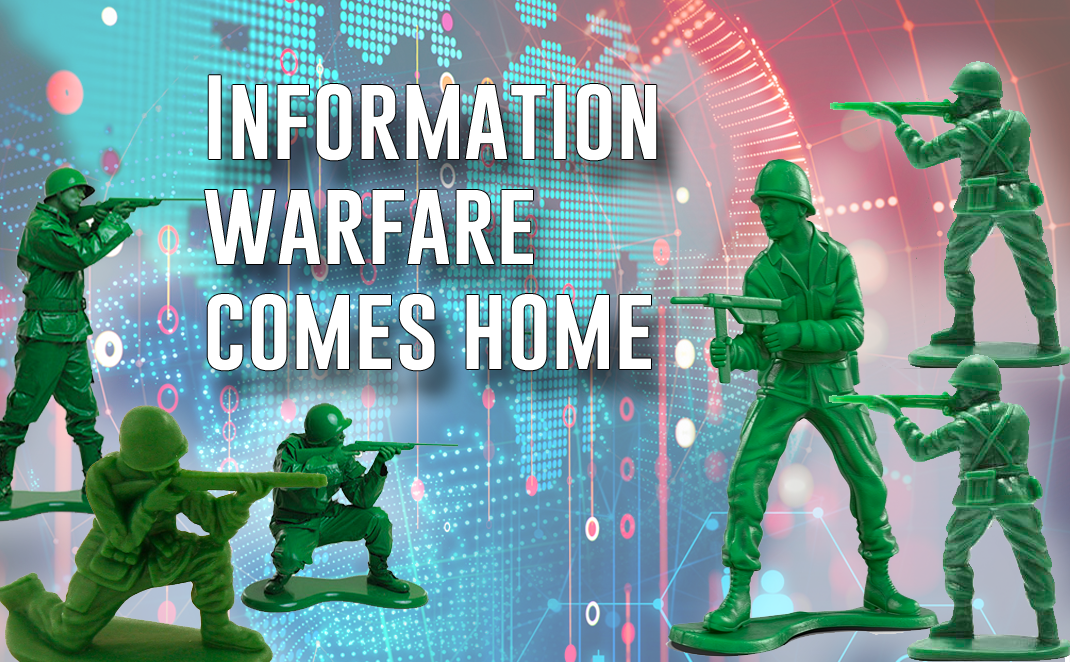 Every day, there’s a war taking place on devices you carry in your pocket.

We are most certainly at the white-hot center of information warfare. There’s been plenty written about this, and I won’t retread it. But I do want to share an analysis that makes the argument that this war is far more aggressive, strategic, and frankly successful than you can imagine.

In it, she writes about the historical precedent and consequences of misunderstanding the changing nature of warfare.

“The combatants are professional, state-employed cyberwarriors and seasoned amateur guerrillas pursuing very well-defined objectives with military precision and specialized tools,” writes DiResta. This is not a bunch of amateurs messing around with the dark web.

This new war isn’t about capturing land as in previous conflicts. Instead, in the information war, the territory being won is the human mind.

This is at its core what the Mueller investigation is about. Did Russian government cyber-warriors attack us, and was the current President of the United States a knowing and willing participant?

And we could have seen it coming.  Marshall McLuhan wrote, “World War III is a guerrilla information war with no division between military and civilian participation” — and that was back in 1970.

DiResta reports that the U.S. government saw the threat as well, with the Defense Advanced Research Projects Agency launching the Social Media in Strategic Communications program in 2011 to “preempt and prepare for an online propaganda battle.” It was shut down in 2015 after the threats were determined to be implausible.

Here’s how this warfare works, as DiResta explains it. Digital combatants — often thought of as trolls — pick a story to amplify, often with a short-term news hook. They create a meme, a video, a tweet, or a blog post. The trolls use a mix of human assets and automated “personas” to amplify the story. The message is then pushed into the feeds of sympathetic real people who will amplify it further. If it goes viral or triggers a trending algorithm, it will be pushed into the feeds of a huge audience. Members of the media will cover it, reaching millions more.

Can this problem be solved with better-automated review and editorial? Hardly. If the content is deemed false, it doesn’t matter, it will be taken down. And if amplifier bots get shut down — that really doesn’t matter, they’re easy to replicate.

And the future, as DiResta convincingly predicts it, will only get worse.

"AI-generated audio and video deepfakes will erode trust in what we see with our own eyes, leaving us vulnerable both to faked content and to the discrediting of the actual truth by insinuation. Authenticity debates will commandeer media cycles, pushing us into an infinite loop of perpetually investigating basic facts. Chronic skepticism and the cognitive DDoS will increase polarization, leading to a consolidation of trust in distinct sets of right and left-wing authority figures – thought oligarchs speaking to entirely separate groups.”

I am careful when I write to provide balance and reason. I don’t often shout. So here’s what I’m saying: The digital war that’s exploiting divisions in our society is most certainly WORD WAR III, the battle for our hearts and minds.

And I’ll let DiResta have  the last word: "What made democracies strong in the past — a strong commitment to free speech and the free exchange of ideas — makes them profoundly vulnerable in the era of democratized propaganda and rampant misinformation."