Unreality TV: The Death Of A President 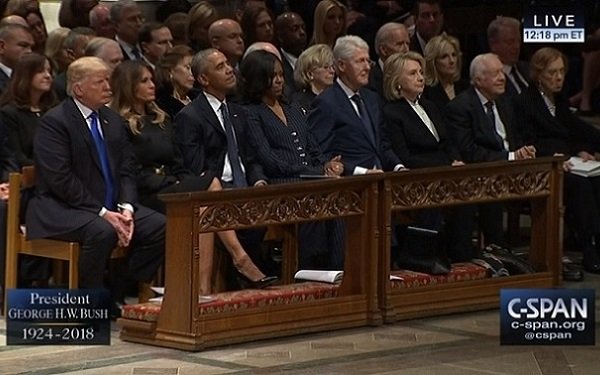 If the greatness of George H.W. Bush had heretofore eluded you, then you were not alone.

Millions of Americans were likely surprised to learn last week, during the voluminous TV coverage of the 41st president’s death, that Bush Sr. was a veritable one-term Lincoln.

Not that there is anything particularly wrong with paying compliments to the departed, but the coverage and commentary illuminated a peculiar aspect of what you might call our national “politico-media” life.

When the man was president, and of course when he ran for re-election against Bill Clinton in 1992 (and lost), he was portrayed as a president who could do almost nothing right.

And yet -- and this always happens -- when he died, the media made him out to be a grand symbol of simpler times, when politeness, an even temperament and good manners counted for something. And -- gushed various pals, pundits and politicians -- wouldn't it be great if we could return to those good old days of gentility that were the early ’90s?

Well, I was very much alive then, and the notion that the Bush era was any less divisive and strife-ridden than any other one strikes me as poppycock. But hey, I'm not a smart interpreter of history along the lines of Sean Hannity, Laura Ingraham or James Baker (who I think I heard declare that his friend the elder Bush was one of our greatest presidents, period).

Sure, in his private life, Bush 41 might have been a great guy, especially if you were a member of his family and could count on spending languid summers on the rocky shore of Maine in the luxe family vacation compound.

But the way our divisive media and political classes suddenly come together in harmony when a president dies can feel unseemly, since 99% of the time these factions on the right and left are at each other's throats and locked in a death struggle.

But then George Bush the Elder dies, and America suddenly becomes a land of harmony where -- get this -- patriotism is treated like a virtue instead of a vice, and Democrats and Republicans suddenly love each other.

This fiction is brought into sharp relief at these funeral events when TV brings us the spectacle of the former presidents and their wives, along with the current president and first lady, seated alongside each other in a front pew (such as the scene in the screenshot above from Bush Sr.’s memorial service in Washington last Wednesday).

These tableaux never fail to fascinate as these political rivals who regarded each other with such evident hatred when they faced off in elections, are suddenly seen looking as if they're all friends.

Meanwhile, some of us at home are thinking: Why doesn't Hillary express how she really feels about sharing a pew with Donald Trump and just flip him the bird? Now that would be reality TV worth watching.

Well, at least the pictures were often lovely to look at, as they usually are in these televised national events -- the last of which was Ronald Reagan's send-off in June 2004.

It is easy to be stirred by the televised pageantry of such things -- the music, the sight of ordinary people lining up on the Capitol steps to enter the rotunda and pay their respects, and the many representatives of our uniformed military services taking such mindful care of the president’s flag-draped casket as he lay in state and then was moved to churches in Washington and then to Texas, where a special train -- another symbol of a bygone era – conveyed him to his final resting place.

These state funerals are so well-choreographed that it makes you wonder: Why is it that this government of ours, which always pulls off these complicated presidential funerals with such efficiency and aplomb, cannot seem to do anything else right?

news, politics, tv
2 comments about "Unreality TV: The Death Of A President".
Check to receive email when comments are posted.
Read more comments >
Next story loading