Holiday Campaigns Pull At The Heartstrings, Offer Advice And Warnings 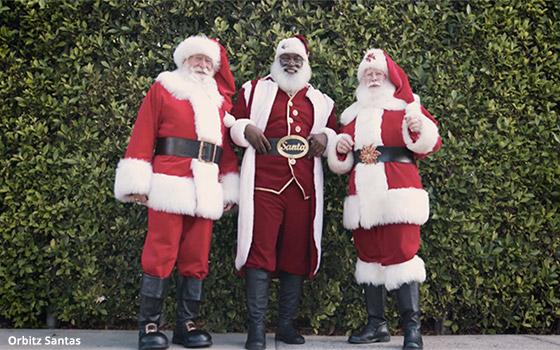 Hard-working Santas will get a break, thanks to Orbitz and agency Havas. A new Orbiz campaign kicks off with a video on the travel site's social channels and custom landing page that features footage of three veteran Santas sent on vacation to "Santa" Monica for rest and relaxation.

Orbitz is also asking parents to upload photos of their kids meeting Santa on Instagram with #SantaNeedsAVacation. For every tagged photo, Orbitz will donate $5 in Orbucks -- the site’s travel currency -- so that volunteer and working Santas can take a trip to a location of their choosing after the holiday.

The money will go toward hotel stays for 10 Santas who have graduated from Tim Connaghan’s School4Santas program.

The NBA and agency Translation are lighting up the season with a TV spot to support the league's five different Christmas Day match-ups. Images of athletes playing that day, including NY Knicks Tim Hardaway Jr., Portland Trail Blazer Damian Lillard and Boston Celtics Kyrie Irving, are viewed as a holiday light show accompanied by a modern rendition of "Deck The Halls."

The ad premieres Dec. 14 during ESPN's doubleheader between the Philadelphia 76ers and Indiana Pacers and the Denver Nuggets and Oklahoma City Thunder.

Busch Beer is helping people avoid awkward holiday conversations with the Busch Button sweepstakes that awards social-media fans with a real-life buzzer that slowly says the word Busch. To win the button, developed with M&C Saatchi Sport & Entertainment and produced by Deutsch, people must use five emojis to describe their family gatherings using the #BuschButton and #Contest hashtag through Dec. 14. The beer brand will distribute five buttons per day.

Holiday shoppers are treated to "surprise and delight" activations playing off classic holiday moments for Westfield Malls. The creative, developed by agency Pitch, includes the spot Mistletoe, which features a man hanging some mistletoe, as well as emerald green shoes, while his girlfriend grabs the shoes and avoids kissing him.

Another spot, Cracker, shows a family discovering an array of luxury items under the tree. The media buy includes digital, social (both paid + organic), print and in-center at the malls.

Adventist Health System is using the holidays to raise awareness for its upcoming rebrand to AdventHealth beginning Jan. 2. The creative, developed by 22squared, brings together cancer survivors to form the Survivor Bell Choir as they sing the holiday carol "Silent Night."

The song can be downloaded on iTunes, Google Play and Amazon, and it’s recognizable by Siri and Shazam, and add-able to Instagram stories with all proceeds benefiting cancer efforts across AdventHealth. The campaign runs via broadcast TV/cable and cinema, as well as across Facebook, Instagram and YouTube.

Greenpeace France is pivoting from its typical heart-warming holiday spot to instead raise awareness about air quality. The "Handmade Gift" creative, developed by 84.Paris, uses stop-motion animation to show a little girl not worried about protecting her stuffed bear from the cold weather, but rather air pollution. The 90-second clip took over 80 hours to shoot.

The film debuted Dec.10 online and will air on a large screen at a Parisian Christmas market near the Jardin des Tuileries.

The Ad Council and the Television Bureau of Advertising (TVB) are launching a new installment of Project Roadblock to remind people not to drink and drive, marking the industry’s largest annual TV station-supported initiative of a single PSA campaign.

The campaign will include new creative, “Warning Signs: Holiday Party." Developed pro bono OMD and production company HYFN, this PSA shows a coworker oversharing details about his romantic life to his female colleague before the ad freezes to remind viewers that oversharing is a warning sign they’re buzzed and should look for an alternative way home. The ad concludes by reminding viewers that "Buzzed Driving is Drunk Driving."

More than 1,000 broadcast TV stations from all 50 states have signed on to support the campaign running Dec. 26-31.