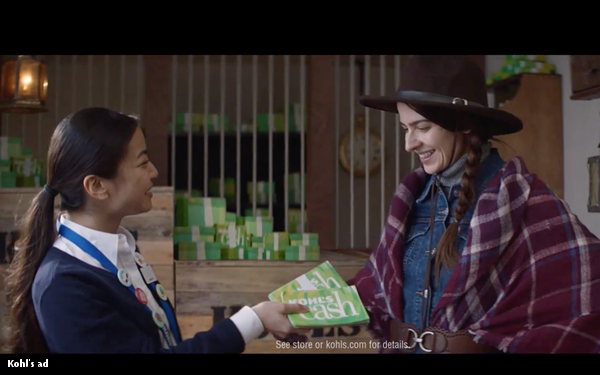 Consumers may be getting closer to their holiday shopping deadlines, but it looks as if large retailers are relying less on advertising to win them over.

Kantar Media says national spending from the 10 biggest-spending brands is down 2% so far, from about $1 billion last year to $986 million at this time.

It also says advertising on Facebook is off sharply, dropping 34% to $157 million, citing data from Pathmatics.

Of the top 10, only Amazon (up 198%) and Kay Jewelers (up 16%) have dialed up seasonal TV spending. And only three—Walmart, Amazon and Kohl’s — have ramped up their Facebook budgets.

Overall, Kantar says it detects a decline in holiday ads hyping specific days, such as Black Friday and Cyber Monday. For instance, it found that retailers spent just $9 million on Cyber Monday ad messages on TV, with that spending coming from only 11 advertisers. That’s down considerably from $19 million from 12 advertisers last year.

“Retailers are now often offering discounts both before and after Black Friday, creating less urgency around Black Friday on all sides,” Kantar says.

And easy access to fast internet connections means there’s no need to wait for Cyber Monday. “Increasingly, retailers need to maintain wallet share not just during Black Friday but throughout the entire holiday season, a particular challenge during a year like this one where Thanksgiving has fallen much earlier than usual.”

As the calendar winds down, retailers are pulling out all the stops. Kohl’s, which is pushing its cash-saving emojis on social media, says it will stay open round the clock leading up to the holidays, starting Dec. 21, and offer free in-store pickup on many items right up until 6 p.m. on Christmas Eve. Macy’s is pushing curated gift offerings, while Best Buy is dangling lower prices, with a Nick of Time sale slashing hundreds of dollars off some Apple, Samsung and Lenovo items.

A new report from NPD Group finds that shoppers are stepping up their mobile purchases this season, with one in six planning to use their phone to buy something; among millennials, that rises to one in three. Half of those in its survey say that real-life shopping puts them in the holiday spirit, but mobile devices make it easier.

“We’re observing an abundance of ‘hands-free shopping’ at retail this holiday season, the result of increased free shipping offers, and the blending of in-store and online shopping capabilities,” says Marshal Cohen, NPD’s chief industry advisor, in the report. “By making purchases on their mobile device while in stores, [consumers] can continue to shop without the hassle of lugging packages.”