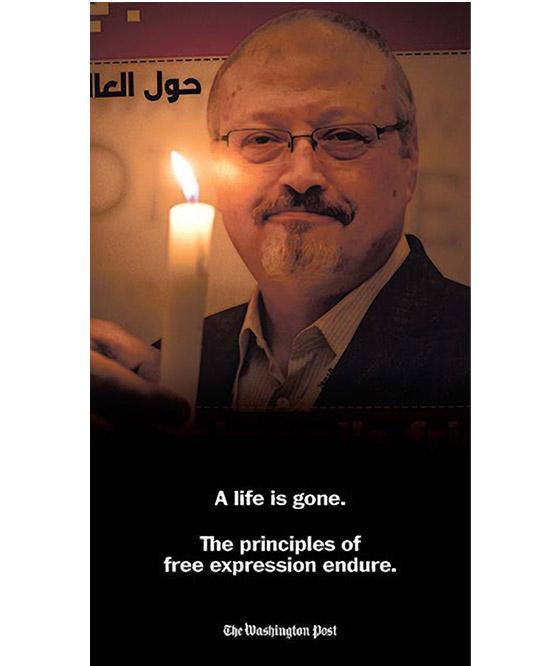 ran a full-page ad Friday focused on the death of columnist Jamal Khashoggi.

The ad is part of a larger advertising campaign planned by Washington Post publisher Fred Ryan to run in early 2019, according to Politico.

The ad features Khashoggi’s face illuminated by a single candle accompanied by the phrase: “A life is gone. The principles of free expression endure.” Previous ads have also appeared in the newspaper prior to Friday’s run.

Earlier this week, Khashoggi was honored as one of Time magazine’s p ersons of the year, which featured journalists who have been killed, jailed or punished as they pursue the truth in their work.

Separately, The Atlantic has been boosting its beats and staff in the last year. In its latest announcement, the publication has tapped Michael Owen as deputy editor for TheAtlantic.com.

Owen, who will join in late January, most recently helmed The New York Times’ team behind audience strategies and digital presentations. During his tenure, he was part of the team that invented, launched and edited the NYTNow app.

He has also held positions with the Los Angeles Times and HuffPost.

In his new role, Owen will work closely with senior editors to make the Atlantic site’s content more visually dynamic and data-driven, while also focusing on intertwining editorial and user experience.

In a memo to staff, editor in chief Jeffrey Goldberg and editor of TheAtlantic.com Adrienne LaFrance noted Owen’s “rare combination of product-mindedness and editorial thinking — which will be instrumental in reaching our most challenging and exciting editorial goals.”