Elf Yourself Back For The Holidays, With A Facebook AR Twist 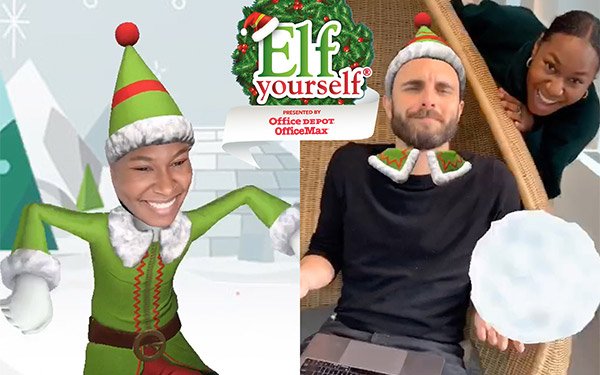 The elves are back for the holidays -- and now they’re linked in with Facebook’s augmented reality filter.

The well-known Elf Yourself mobile app from Office Depot, an annual tradition since its creation in 2006, allows people to elf themselves by adding up to five faces of friends or family members, which then dance around to a number of tunes.

Two new dances, the floss and orange justice, were added this year. They’re free, while others, such as those titled Honky Tonk, Cats!, Office Party, Dance Off and Hip Hop, can be purchased for 99 cents each, or all 19 dances for $5.99.

Many consumers appear to like adding the additional dances, since the ElfYourself app is currently one of the top-grossing iOS apps, according to App Annie.

An augmented reality version called Wonderland can also be had for 99 cents and then the elves can virtually dance on the floor in front of the user, although the free dances may totally satisfy most people.

From a publicity perspective, Office Depot should be pretty happy with its elves. Since launch, nearly 2 billion elves have been created from more than 500 million sessions globally, according to the company.

One of the brilliant parts of Elf Yourself marketing is that once a dance with friendly faces is created, it can be emailed to friends and family, who then can easily figure how to Elf themselves, and the chain continues.

With the new Facebook integration, consumers can Elf themselves using Facebook’s AR camera effects, and even throw virtual snowballs at each other without leaving Facebook.

The Elf Yourself app allows the use of stored photos or taking of live shots, making it lightning-fast to get to the dance part.

The little dancing elves have been very busy so far this year, since there already have been 926,0000 downloads of the app with 8 million app and desktop sessions.

The Elf Yourself phenomenon may be seasonal, but it easily can become part of an annual family tradition.