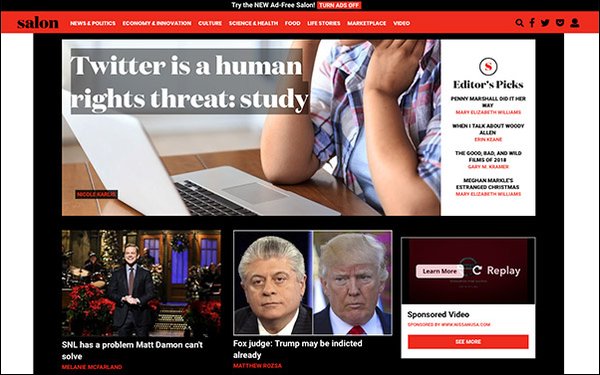 LaterPay, which offers a patented payment infrastructure technology, has entered into partnerships with Salon and Pueblo Pulp that allow the publishers to open up revenue streams through amped-up subscription and ad-free options.

Earlier this year, Salon unveiled a new paid app that gave readers access to an ad-free experience in exchange for the ability to mine extra computer power for the cryptocurrenty Monero. Building on that momentum, Salon.com, the flagship property of Salon Media Group, Inc., partnered with LaterPay as it released an ad-free version of its website to readers.

Working with LaterPay, Salon and the technology company found a new, practical road to monetization through a user-centric model that would allow Salon to generate reader revenue without the need to offer premium content.

By using LaterPay, U.S. readers can make a one-click time pass purchase —i in increments of one hour, one week, one month or one year — to access the ad-free version of the site after they cross the threshold of $5 in content.

“Our core belief is to provide our readers the best experience possible, whether it is through an ad-supported or paywall channel. LaterPay’s technology effectively allowed us to do that by offering readers choice through subscriptions or on a pay-per-article basis,” Jordan Hoffner, CEO, Salon Media Group, told Publishers Daily.

According to Hoffner, the site has generated hundreds of subscribers on the ad-free version in the first month without any promotion.

“By working with LaterPay, publishers gain an active partner throughout the testing, implementation and ongoing monetization process,” Cosmin Ene, founder-CEO, LaterPay, told Publishers Daily. He says the company's monetization  options give readers “freedom of choice, which has proven to be successful when driving users through the conversion funnel.”

The publication also implemented LaterPay’s contributions button, which allows readers to make donations to their favorite publications easily, in increments of $3, $5, $10 and $25.

According to the outlet, its work with LaterPay has helped it become a digital daily generating more revenue that it would with ads.

John Rodriguez, Pueblo Pulp publisher, told Publishers Daily: “A majority of our users read us on their phones, LaterPay gives our audience a way to read our content and support our journalism all without the frustration of other content systems. We chose LaterPay because it was the most innovative system out of a dozen that we looked at.”

The early numbers generated from both Salon and Pueblo Pulp’s models have excited and surprised Ene and others at LaterPay.

“We want to help publishers understand that there are multiple revenue streams available to them. They don’t have to cannibalize their ad revenue to implement another monetization strategy,” he stated.