'NYT' Looks Back At Its Year In Numbers 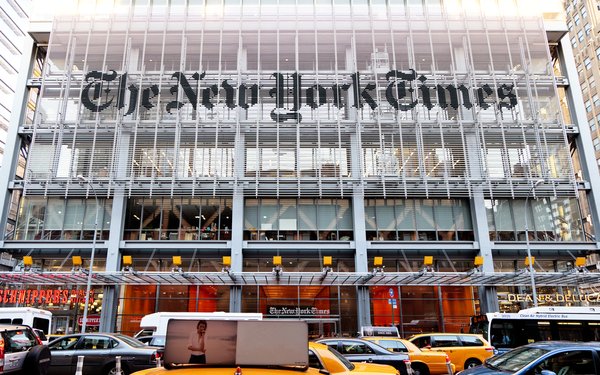 The New York Times is known for its record-breaking numbers, most notably its more than 4 million paid subscribers. Today, the company released a closer look at its year in numbers, zooming in across its newsroom, stories, subscriber base and more, to offer an in-depth look at what makes The Times tick.

This year, the newspaper publish many important stories, including a blockbuster special investigation about the Trump family’s taxes: “Trump Engaged in Suspect Tax Schemes as He Reaped Riches From His Father.” (It took three dedicated reporters 18 months to sift through 10,000 financial documents and 200 Trump family tax returns, resulting in a 14,000 word story).

To reach the level of reporting demanded by the country's paper of record, The New York Times counts 1,550 journalists on staff, with over 100 new journalists added this year.

Those journalists report from 160+ countries and their stories are published in 11 languages, including English, Chinese, Spanish, German, French, Korean, Italian, Japanese, Portuguese, Russian and Arabic.

The Times introduced new columns this year, including “Overlooked,” a series of obituaries highlighting the lives of notable women whose deaths went unrecorded. The paper has now published 54 in all.

The company also began to explore the possibilities of AI and produced 13 augmented-reality features.

In related news, Chartbeat released its list of the most engaging news stories from 2018. The company ranked the stories according to how much time readers spent with each.

The New York Times held the No. 1 spot with its story “I Am Part of the Resistance Inside the Trump Administration,” penned by an anonymous writer. It also held the No. 4 and No. 8 spots with the stories “This is Why Uma Thurman is Angry” and “Donald Trump Didn’t Want to Be President,” respectively.

Also in the top 10 were New York, ESPN and Rolling Stone.

“Each year, the Most Engaging Stories list proves the power of storytelling. We learn more about the world, of course, but we also learn more about how to make sense of it and each other,” stated John Saroff, CEO, Chartbeat.