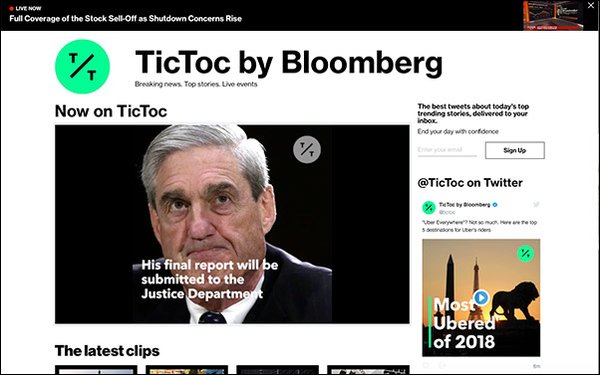 ’s TicToc —a 24/7 news network built for social-media — will expand beyond Twitter next year.

New deals will distribute its content onto connected TV and dedicated apps.

This week, a partnership with Reach TV will distribute TicToc videos to over 500 screens in over 30 airports in the U.S. and Canada. Bloomberg plans to expand the distribution to parts of Europe early next year, according to Variety.

TicToc will also launch an owned-and-operated digital video platform in early Q1, with the potential for long-form programming.
Bloomberg plans to develop a OTT streaming network for TicToc where viewers “can catch-up on news for longer periods of time on larger screens,” according to a spokesperson.

This year, TicToc launched a daily podcast and a newsletter. It's also available on Amazon Echo. It has a team of 70 based in New York, London and Hong Kong.