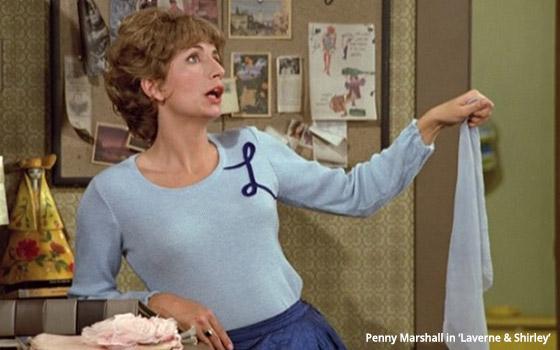 “Give us any chance we'll take it, read us any rule we’ll break it, we’re gonna make our dreams come true -- doin’ it our way.”

So went the opening lines of the “Laverne & Shirley” theme song, replaying this week in many of our minds following the death of Penny Marshall, who played Laverne.

Sitcom theme songs are a thing of the past on television, and so are gung-ho physical comediennes like Penny Marshall.

In the many clips from that hallowed sitcom that were seen all week in numerous TV obituaries, she could be seen, alongside Cindy Williams as Shirley, in all sorts of physical contortions.

In clips from an interview Marshall conducted along with Williams five years ago, Marshall said they never said no to anything they were asked to do.

The results were uproarious, and like so many other hits of the pre-cable TV era, “Laverne & Shirley” routinely drew audiences in the tens of millions. Good-bye to all that. And good-bye to Penny Marshall too. By all accounts, she was an “L” of a woman.

Anthony Bourdain's suicide in June at age 61 shocked the world. He was rightly eulogized as one of the modern TV era's most influential and well-regarded personalities.

He took the food-and-travel genre farther than it had ever gone before and inspired a whole generation of food-travelers now hosting their own shows on TV.

Long before Bourdain, Robin Leach took us inside the “Lifestyles of the Rich and Famous” and wished all of us champagne wishes and caviar dreams.

Leach was 76 when he died this year, but I can still vividly recall his celebrity-studded 50th birthday party in 1991 where I first laid eyes on a flamboyant New York real estate developer who couldn't seem to keep himself out of the local tabloids. He was Donald Trump, with Marla Maples on his arm.

This year, we lost two TV producers who were known to millions from the appearance of their names at the conclusion of their shows.

Stephen Bochco was the kind of pioneer who comes along only once in a generation -- a man whose approach to television was to always push its boundaries. The result was a string of unforgettable TV entertainments, including “Hill Street Blues,” “L.A. Law,” “Doogie Howser M.D.” and “NYPD Blue.”

Paul Junger Witt had a string of top hits too. His name appeared on “Here Come the Brides,” “The Partridge Family,” “The Golden Girls,” “Soap,” “Benson,” “Empty Nest” and “Blossom.”

As the father of Frasier and Niles Crane, John Mahoney will be remembered as a member (if not the leading light) of one of the most storied casts in the history of TV sitcoms -- alongside Kelsey Grammer, David Hyde Pierce, Jane Leeves and Peri Gilpin in “Frasier.”

We mourned a legendary TV wrestler from our youth, Bruno Sammartino; a TV sitcom judge, Harry Anderson of “Night Court”; an exuberant song-and-dance man, Ken Berry; a discoverer of future TV comedy stars, Mitzi Shore of The Comedy Store in L.A.; and a slew of character actors, including David Ogden Stiers of “M*A*S*H,” Jerry Van Dyke of “Coach,” and Bill Daily of “I Dream of Jeannie” and “The Bob Newhart Show.”

Burt Reynolds was a beloved star of both movies and television. Nanette Fabray’s career in television went all the way back to 1949. Will Vinton was the claymation master who made the California Raisins sing. Comedian Marty Allen was a mainstay of variety and talk shows in the decades of our television youth.

Hail and farewell, and God bless the Rev. Billy Graham, who died this year at the age of 99. He was a pioneering television personality who first took to the new television airwaves in 1947, and did not stop until 2005 -- a span of almost 60 years.