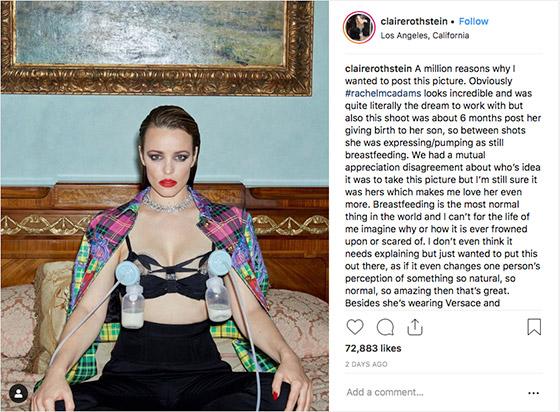 Magazine editors and publishers for years have bemoaned the diminished status of print publications in the national conversation about news and topical issues.

Ad pages have declined, print issues have gotten thinner and editorial budgets have been slashed.

But magazines still can generate buzz, as boutique publication Girls. Girls. Girls. does this month with its bombshell spread. It shows actress Rachel McAdams draped in Bulgari diamonds and Versace — while being hooked to a breast pump.

The image is memorable, unexpected and absurd.

And yet “breastfeeding is the most normal thing in the world, like breathing and I can’t for the life of me imagine why or how it is ever frowned upon or scared of,” Claire Rothstein, the founder of Girls. Girls. Girls., says in an Instagram caption alongside the picture.

Yes, breastfeeding is as old as mammality. But Rothstein and McAdams were at least impishly aware the image would get publicity while stirring debate and even controversy.

The photo shows the glammed-up star of “Mean Girls” and “The Notebook” with bright red lipstick and slicked-back hair.

But any reader could be forgiven if the only thing they remember is that her shirt is unbuttoned to partly expose her breasts, which are attached to suction tubes and clear plastic bottles half-filled with mother’s milk.

Rothstein notes in her Instagram post that the breast-pumping picture wasn’t part of the original plan, but was more of a spontaneous idea, since McAdams had to pump milk during the shoot. She had given birth to a son six months earlier.

“We had a mutual appreciation disagreement about who’s idea it was to take this picture, but I’m still sure it was hers, which makes me love her even more,” Rothstein writes.

The photo is getting attention on social media and news websites, while inviting discussion about the difficulties that mothers face when trying to hold down a job and nurture a newborn.

Scientific studies emphasize the importance of breast milk to the healthy development of a child. Those reports only magnify the pressure that many new moms feel to either breastfeed or forever carry the guilt of cracking open a bottle of Similac.

If the McAdams picture stirs controversy, it’s more likely because it invites debate about women’s empowerment. Yes, Americans remain uptight about nudity, 60 years after the first issue of Playboy and 40 years after Madonna shocked audiences with her overt sexuality.

Still, it’s heartening to see a magazine generate buzz that publications like Vanity Fair used to do. Remember its memorable 1991 cover of a nude -- and very pregnant -- Demi Moore? Showing a sex symbol in the most natural state instead of haute couture was sensational.

Girls. Girls. Girls. and McAdams show that magazines still have a significant role in our national conversation.