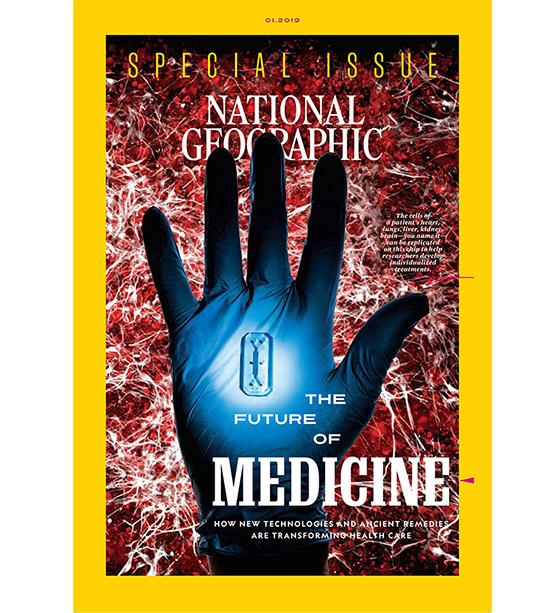 For the Jan 2019 issue, National Geographic published what it considers one of its most ambitious stories: “The Immortal Corpse,” part of its single-topic issue “The Future of Medicine.”

Originally pitched by Kurt Mutchler in 2002, “The Immortal Corpse” follows Susan Potter as she first agrees to donate her body to science and finally becomes the most advanced virtual cadaver in history. Her body is cut into thousands of thin sections, photographed, digitized and finally studied by scientists and medical students.

“Because of the journalism that went into this, not only do we see Susan Potter as, technically, the most high-resolution human cadaver in existence, but we also get to know the person who became that image,” Susan Goldberg, editor-in-chief of National Geographic magazine and editorial director, National Geographic Partners, told Publishers Daily.

“Through storytelling, we come to understand her motivations, her struggles and her eccentricities, which serve to add so much color to the digital imagery she exists as today.”

The issue featuring the story snagged a sponsorship by PhRMA, a representative of America’s bio-pharmaceutical companies. The sponsorship includes a cover roadblock of their GoBoldly advertising campaign and a standout Sponsor Spotlight custom communication printed on the paper issue cover wrap.

“We’re always working to pair stories of cutting-edge science with a layer of human interest,” said Goldberg. “At National Geographic, we’ve been telling stories no one else can tell for 130 years, stories of the human experience, of science, and of medicine. In all that time, we had never heard of a story like this.”

The story is available to National Geographic’s 760 million and growing global audience. In addition to the print and digital story, “The Immortal Corpse” package includes an 18-minute documentary.