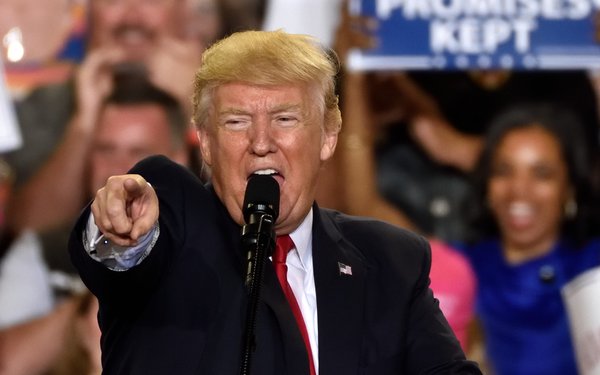 The Department of Justice signaled this week that it plans to ask a federal judge to dismiss a lawsuit alleging that President Trump violates the First Amendment by retaliating against critics in the media.

The lawsuit -- brought by writers organization PEN America in October -- alleges that Trump targeted Amazon, CNN, NBC and individual journalists due to their critical coverage of him. The organization asked a federal judge to issue a declaratory judgment that Trump acted unconstitutionally, and an injunction prohibiting the federal government from retaliating against media organizations and journalists for their criticism of the White House.

In a letter filed Thursday with U.S. District Court Judge Lorna Schofield in New York, the DOJ says it plans to seek dismissal of the lawsuit for several reasons, including that PEN America's complaint doesn't spell out how its members have been injured by Trump's alleged actions.

On Friday, Schofield said she won't consider the DOJ's arguments until next year, and scheduled a conference for February 12. She also said PEN America could amend its complaint by January 18, and that if the DOJ still plans to seek dismissal, it should spell out its position in a new letter by January 29.

But the letter filed Thursday offers a preview of the arguments the DOJ is likely to make next year. In that letter, the administration argues that PEN America “failed to identify any information or ideas withheld from it or its members.”

The government added that -- according to PEN America's complaint -- journalists have continued to report on the administration. Therefore, the DOJ contends, Pen America's members haven't “been adversely affected by defendant’s actions.”

PEN America's alleged in its initial complaint that Trump improperly threatened regulatory action in an attempt to retaliate against critics and influence news reporting. “Defendant’s use of the power and machinery of government to punish his media critics creates an atmosphere in which journalists must work under the threat of government retaliation,” the lawsuit alleged.

The complaint alleged that Trump repeatedly “called for action to punish the online retailer Amazon because Jeff Bezos, its chief shareholder and CEO, owns the Washington Post, whose accurate coverage of his Administration the President finds objectionable.”

PEN America also noted that Trump threatened NBC last year, following a news report about statements Trump made regarding nuclear weapons. “With all of the Fake News coming out of NBC and the Networks, at what point is it appropriate to challenge their License? Bad for country!” he tweeted.

NBC affiliates hold broadcast licenses subject to Federal Communications Commission regulation. “Revocation of a federal license is a death sentence for a broadcast station,” PEN America said in its complaint.