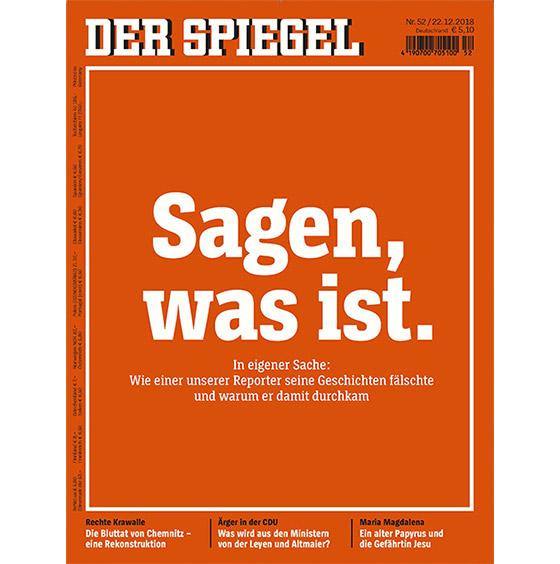 is at the epicenter of a major scandal after the top-selling European news magazine said an award-winning scribe reported enough fake news to make Russian election-meddlers blush.

It’s an embarrassing admission for a publication with a renowned fact-checking department that the Columbia Journalism Review described in 2010 as the biggest in the world.

The scandal is reminiscent of other journalists who reported fake facts, including Jayson Blair at The New York Times, Stephen Glass at The New Republic and Jack Kelley at USA Today.

Claas Relotius, who won Germany’s coveted Reporterpreis award four times, resigned this month from Der Spiegel (which means “The Mirror” in English). He admitted to fabricating some of his reporting in the past decade, the magazine said.

He invented events, dialogue and people in stories ranging from war orphans in Syria to an inmate at Guantanamo Bay. But his carefully woven narratives started to unravel after a colleague questioned a recent story about President Trump’s rural supporters.

A 7,300-word feature, titled “In This Small Town,” offered a detailed snapshot of Fergus Falls, Minnesota, a town where people “pray for Donald Trump on Sundays,” as Relotius reported. His story was filled with details that reinforced an image of provincial America that Europeans — and coastal elites in the United States — ridicule and despise.

Given that prejudice, perhaps it was too easy for Der Spiegel’s fact checkers to believe the town had a sign saying “Mexicans Stay Out.” Or that city administrator Andew Bremseth, a real person, carried a handgun to work, was a virgin and had “never been to the ocean.” Or that the war film “American Sniper” still played at the local cinema three years after its release.

These kinds of details make for interesting stories and character studies — especially when they’re factual. Der Spiegel has pledged to launch a transparency campaign to look into every one of Relotius’ stories and publish the results. Perhaps editors will be forced to resign, as in the Jayson Blair and Jack Kelley scandals.

“We must see what control mechanisms failed, whether they did or whether we were negligent,” Steffen Klusmann, who is next in line to be Der Spiegel’s editor in chief, said in a video interview on the magazine’s website.

The magazine’s fact-checkers may want to talk to Michele Anderson and Jake Krohn, two residents of Ferguson Falls, who last week wrote a post on Medium that describes, in their view, numerous inaccuracies they found in Relotius’s story.

The episode is a reminder that ideology too often clouds journalism, diminishing its role of informing the public in free societies and giving critics more ammunition to attack reporters with accusations of bias.

Such criticism has grown more pronounced among populist groups in Europe and the United States. And that’s fine. The media need to be held accountable. Every news outlet should be prepared to back up its reporting with facts and reliable sources. That kind of journalism deserves respect.

In addition, no one should ever condone violence against a reporter, as President Trump appeared to do this year in praising a congressman who once body-slammed a reporter. He’s made subsequent statements saying he doesn’t condone violence, a message that’s worth repeating.

Unfortunately, 58 journalists have been killed this year, including 34 who were murdered — almost twice as many as in 2017 — according to the Committee to Protect Journalists. Let’s hope this grim trend doesn’t continue in the New Year.