Year In Reviews: These Shows Got Thumbs Up in '18 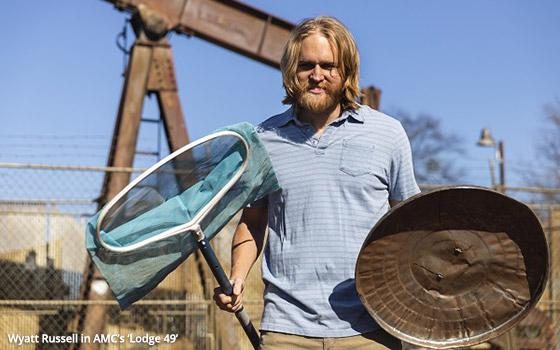 What is the value of a rave review? Taken by itself, not much.

Take the Paramount Network ’70s series “American Woman,” which premiered last summer and was then cancelled after its inaugural season.

The TV Blog (yours truly) considered this half-hour drama series starring Alicia Silverstone as one of the best new shows of 2018.

But on the review-aggregating Web site known as Rotten Tomatoes, “American Woman” scored a lowly 44% -- which means it was largely reviewed unfavorably.

Certainly, this was not the first time in a long career that all other TV critics have been wrong. And it won't likely be the last either.

At least they reacted sensibly to “Lodge 49,” which scored an 85% on the thumbs-up scale on Rotten Tomatoes. This new drama series came to TV last summer on AMC as a breath of much-needed fresh air.

For once, a TV drama came on the scene that did not rely on shocking violence. Nor did it ask us to root for some odious anti-hero. “Lodge 49” was drama on a human scale -- something almost wholly missing from TV.

It was the best new show reviewed here in 2018. And unlike “American Woman,” it will be back for a second season.

In the year about to end, new shows that were well-received here showed up on a variety of networks, including TNT, TBS, FX, the CW and Paramount.

In addition to “American Woman,” the TV Blog gave a rave review to Paramount's “Waco” miniseries, which launched the Paramount Network last January -- rebranded from Spike.

One of the most effusive TV Blog raves of the year went to the 19th-century crime drama “The Alienist” on TNT. This production was a wonder to behold.

Speaking of which, Tracy Morgan was a wonder to behold too in his new comedy “The Last O.G.” on TNT's sister network TBS.

It was the year's best new comedy, not least of which because it represented Morgan’s long-awaited return to TV following a near-fatal accident on the New Jersey Turnpike in 2014.

Hats off to Morgan's fellow cast members on “The Last O.G.” too -- Tiffany Haddish and Cedric the Entertainer.

In the reviews here, the CW had an unexpected winning streak. The TV Blog gave thumbs up to the urban superhero drama “Black Lightning,” the high school football drama “All-American” and the family drama “Life Sentence.”

Now, every time a new CW series comes along, the TV Blog expects to have a very pleasant work day. Thank you, CW.

Other dramas that fared well here under the keen critical scrutiny of the TV Blog included “McMafia” and “The Terror” on AMC, and “Krypton” on Syfy.

The limited series of the year was easily “The Assassination of Gianni Versace” on FX. Among other compliments, the TV Blog described this sumptuous viewing experience as “a dazzler,” which it surely was.

In the comedy category, the pickings were slim. One of the only other new comedies to get an unequivocal thumbs-up review here all year was “Barry” on HBO -- the Bill Hader series about an emotionless hit man who enrolls in acting classes.

Hader was great, but in the role of his acting teacher, Henry Winkler gave one of the year's most outstanding performances.

The TV Blog also gave a rave to the new “Roseanne” when it premiered last spring. Regardless, the whole thing imploded. Well, it was fun while it lasted!

In the reality realm, the TV Blog shone favorably on Amy Poehler’s and Nick Offerman’s sunny summer competition series “Making It” on NBC. The show focused on various craftspeople and celebrated their work and ingenuity.

The TV Blog also liked the Pentagon reality series “Chain of Command” on NatGeo and “Undercover High” on A&E, in which some young-looking 20-somethings were embedded “undercover” in an American high school to study the habits and lifestyles of teens.

Looking back, the TV Blog is surprised to find a positive review for this decidedly gimmicky scenario. But nevertheless, that is how the review came out.

All of this and “Andre the Giant” too. HBO’s documentary on the lovable 7’4” wrestler and actor loomed large and stood above the rest of the year’s documentaries.