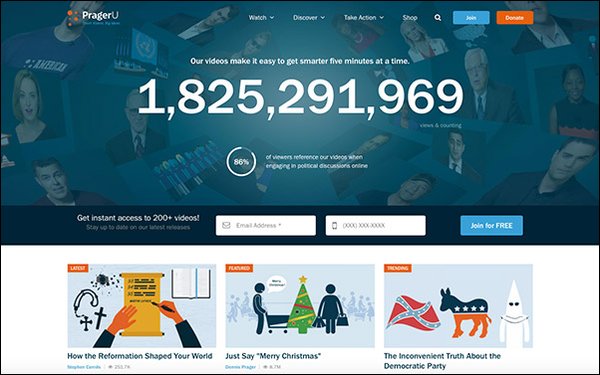 Prager University, which is battling Google over alleged “censorship,” is making a new pitch to revive claims that company violated Prager's free-speech rights, and also engaged in false advertising by promising “content neutrality.”

Prager says in court papers filed Friday that it should have been allowed to move forward with its lawsuit for numerous reasons, including that its allegations, if true, would support the conclusion that Google and YouTube “are engaged in false advertising by inducing the public audience to use YouTube based on false promises of content neutrality.”

The fight between the right-wing Prager University and Google dates to last year, when Prager sued Google for allegedly engaging in censorship by applying its “restricted mode” filter to the school's videos -- effectively making them unavailable to some students and library patrons. Google also "demonetized" some Prager videos, like a clip that posed the question "Pakistan: Can Sharia and Freedom Coexist?"

Google prevailed in March, when U.S. District Court Judge Lucy Koh ruled that Google, as a private business, has the right to decide how to treat material on its platform.

Prager recently appealed that ruling to the 9th Circuit Court of Appeals, arguing that YouTube is a “public forum” -- comparable to a park or other venue where people typically have free-speech rights -- and that the company therefore shouldn't be able to censor lawful speech based on its content.

Now, Prager is firing back at Google, arguing that its position “will have extreme and dangerous consequences” and “eviscerate the fundamental free speech liberties of the more than two billion people who use and depend on public forums like YouTube as their primary form of public communication.”

Prager says Google's prior statements -- including statements to Congress and to the public -- represent that YouTube is a “neutral” platform.

The company adds that its videos shows they “fully comply with with YouTube’s purportedly 'politically neutral' content filtering rules and advertising policy.”

The legal fight is coming as conservative politicians are criticizing web companies for allegedly blocking right-wing speech. Earlier this year, President Trump made the remarkable claim that Google's search engine is "rigged" because it highlights stories from "Fake CNN."

Some observers say there's no evidence that tech companies are especially likely to suppress conservative views. New York Law School professor Ari Waldman, who testified on Capitol Hill earlier this year, told lawmakers that a lot of content is filtered, but "no more so from the right than from the left."