Moonves Tops List Of Most Notable TV Stories Of 2018 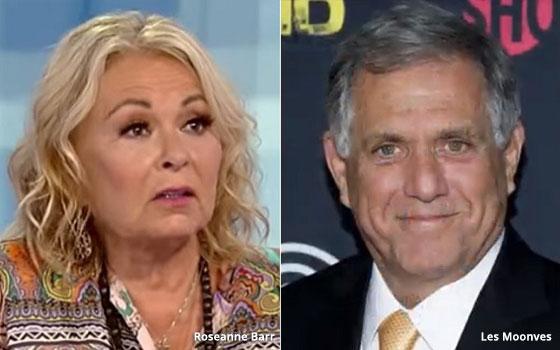 Earlier this year, the TV Blog predicted that the Roseanne Barr and Leslie Moonves stories would likely be vying at year's end for the top spot on various lists recapping the top news stories in TV in 2018.

And it's still true: They are both vying for top ranking, but the TV Blog has to give the edge here to the Les Moonves story.

For a journalist on the TV beat, these two stories occupy two different categories.

You might classify the Roseanne story as a “celebrity meltdown” story -- the outspoken celebrity who misjudged how a tweet she posted on Twitter would play in the court of public opinion.

In Roseanne Barr's case, she almost instantly lost the new revival of her old ABC sitcom. The story was made even more remarkable by the fact that for a few short weeks last spring, the new “Roseanne” was the most talked-about -- and highest-rated -- new network comedy in years.

The new “Roseanne” seemed poised for a long run, but then the antics of the show's star intervened. Its replacement, “The Conners” -- better known as “Roseanne” without Roseanne -- was but a shadow of the original. Alas -- but what a yarn.

The Moonves story, on the other hand, transcends the celebrity-meltdown classification because Moonves was not only a celebrity executive, but unlike Roseanne Barr, he was one of those guys who wields the real power in television. He controlled the purse strings.

That's where the real power lies in the TV business, or any business, and unfortunately Moonves allegedly wielded at least some of his power in efforts aimed at persuading women to have sex with him for the sake of advancing their careers -- which he could choose to advance or not.

Moonves’ removal as top executive at CBS leaves this very old and traditional television company in a state of uncertainty, much like the government of a country after a long-time autocrat, who controlled everything, leaves the scene.

Somehow, Moonves was so charismatic that CBS seemed like it was more than just a legacy TV company. He was so polished that his fall from grace for lewd (to say the least) sexual behavior seemed like the world's biggest surprise.

As a leader in TV, the future course of CBS will have implications for the direction of the TV industry generally. Among other things, Moonves’ removal may make possible an eventual merger between CBS and the Viacom cable networks.

Speaking of mergers, two such deals in 2018 also qualify as two of the year's most significant stories.

Disney's proposed takeover of substantial assets of 21st Century Fox -- not including the Fox Broadcasting network, Fox-owned TV stations and other assets -- is not yet final, but will likely become final in the coming year.

The two deals indicate that consolidation is a trend in full flower in the television business with a high likelihood of more deals to come in 2019.

Elsewhere in television in 2018, Megyn Kelly lost her one-hour show in NBC's morning “Today” lineup after she failed to condemn (and may have actually defended) a Bravo reality TV star, Luann de Lesseps of "The Real Housewives of New York," after de Lesseps dressed as Diana Ross for Halloween and, in the process, darkened her skin for this costume.

Judging from the reaction at NBC and elsewhere, you would have thought Megyn Kelly had come out in favor of minstrel shows. Probably, NBC was looking for an excuse to yank her show anyway, and this blackface controversy was just what the cancellation doctor ordered.

The saddest TV story of the year was Anthony Bourdain's suicide at age 61. Shame on CNN for exploiting his death to promote the final episodes of his show, “Parts Unknown,” so the network could profit from them this past fall.

If there was any clear trend in the making of TV shows in 2018, it was network TV's continuing enthusiasm for remaking old shows, including “Murphy Brown,” “Magnum P.I.,” “Roseanne” and others.

What's next? According to various stories that cropped up all year long, we might be seeing a new “Mad About You,” “Frasier,” “ALF” and heaven knows what else.

I have an idea: How about bringing back “The Nanny” and “Mr. Belvedere” and combining them into one show about household staffs? Something to think about as we head into the new year.