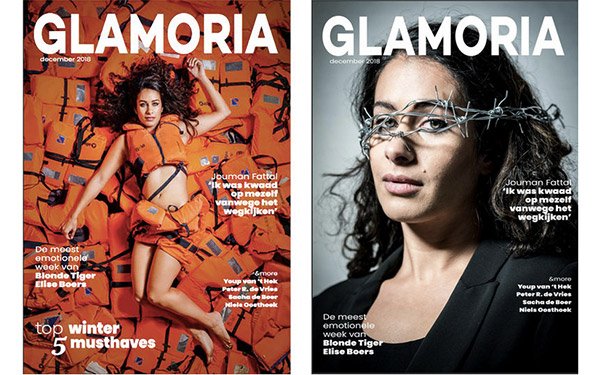 When is it not acceptable to publish a magazine whose cover objectifies women and sexualizes tragedy?

Amnesty International Netherlands, the Dutch branch of the human rights group, learned the hard way after printing a limited run of a 36-page glossy called Glamoria. The title is a mashup of the word “glamour” and “Moria,” a village on the Greek island of Lesbos that has a refugee camp.

The cover shows actress Jouman Fattal, who starred as a medical student in the Dutch sci-fi series “Project Orpheus,” lying half-naked in a come-hither pose on a bed of orange life jackets.

The image is reminiscent of the movie posters for “American Beauty” showing actress Mena Suvari lying on a bed of roses. Fattal, whose family fled Syria when she was a child, is partly covered by two life jackets resembling ones that refugees use to travel by boat, National Public Radio reported.

Amnesty worked with Dutch agency Tosti Creative on the magazine, which was limited to 200 copies as part of a campaign for the "Don't Look Away" petition. The movement seeks government approval to bring 1,000 refugees from Greece to the Netherlands.

However, the online edition triggered a firestorm on social media, where Twitter and Facebook users expressed their disgust, considering how many refugees face violent threats like rape.

“Tasteless this,” Jena Moussa, a reporter for Arabic Al Aan TV, tweeted. “With thousands dead in the Mediterranean, it’s very disrespectful to sexualize the tragedy of refugees.”

As critics piled on and compelled Amnesty International Netherlands to apologize, the controversial magazine cover found some support from one Twitter user. Gerard van der Veer, tweeting with the @G_vd_Veer handle, said the Glamoria is an example of “ironic artistic imagery.”

He cites the book “The Ironic Spectator: Solidarity in the Age of Post-Humanitarianism” by Lilie Chouliaraki, a professor in media and communications at the London School of Economics and Political Science.

The book critiques passive efforts to participate in humanitarian causes, such as attending an entertaining rock concert that raises money for charity. Such events turn people into ironic spectators of others’ suffering, Chouliaraki contends.

She critiques an ironic 2005 ad from the UN World Food Program that touts the “no-food diet” to viewers in developed countries while raising awareness about starvation. Humanitarian groups have resorted to ironic campaigns in response to criticism that using realistic images of human suffering also exploits people.

While the strategy of mixing entertainment with charitable giving has its critics, it remains an effective way to raise money. New York’s Upper East Side would be bereft of its social scene without charity dinners for captains of industry and finance to attend. Who am I to object if a magnate wants to spend $30,000 to sit next to a celebrity at a fundraiser?

For its part, Amnesty International Netherlands replaced the digital version of Fattal with an image showing her face wrapped in barbed wire. The image isn’t as buzzworthy as the life-jacket picture, but at least its draws attention to the plight of refugees instead of a side-show controversy.