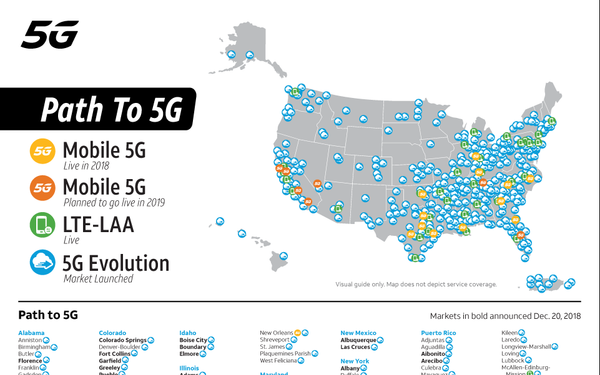 Last week, AT&T unveiled 5G mobile service in 12 cities. At about the same time, but with a smaller gust of publicity, it has now launched 5G Evolution in 385 markets, soon to grow to 400.

But what is it? It’s pretty close to what a real 5G service will be like, when the company gets around to putting it in more markets.

“If you have one of the latest Android devices and it connects to a tower that’s enabled with 5G Evolution, you’ll soon see a ‘5G E’ indicator pop up on your screen. Initially we’ll roll this out on a handful of devices, with more devices showing the indicator in spring 2019,” wrote Kevin Petersen, senior vice president of device and network experiences, AT&T Mobility and Entertainment, on the company’s website.

Really, it’s  4G LTE-A.  That’s fourth-generation mobile phone, as denoted  by 4G. Long- term evolution (LTE) is an improved version, and A is for an advanced improvement.

AT&T says it has 17 different devices capable of accessing 5G Evolution, and while right now those phones tell users they’re connected via using 4G LTE-A, soon, AT&T will change that to “5GE.”

Cell phone shoppers are barraged with all kinds of numbers and initials. Remembering a distinction between 5G and 5GE could be tough.

For consumers, 5G’s improvement over 4G may boil down to one word: ”faster.” But 5G should also bring the ability to connect more devices at once. And 5G networks have far more capacity.

Many experts think 5G’s real impact will be in the business world, for automation and in advance technologies like driverless cars.

AT&T announced its intention to brand 5GE in April 2017, and got hoots of derision from some tech writers and competitors.

T-Mobile’s often quotable CEO John Legere at the time tweeted, “For once, I think I’m speechless.… except… HAHAHAHAHAHAHAHA.” He added snarky hashtags ( “#nicetry”   “ATTFake5G”) and then offered a link to a story on the Android Police website titled “AT&T Is The First Carrier To Say It Has A 5G Network Which Is Complete Bullshit.”

5G customer confusion may only get worse, and it seems 2019 will mostly be spent getting the ball rolling, though bragging rights, complicated as they are, started a lot earlier.

In September, Verizon started its “pre-standard 5G” service base on the company’s own proprietary equipment in four cities: Indianapolis, Houston, Los Angeles and Sacramento, Calif.

The cities planned for 5G in the first half of 2019 are Las Vegas, Los Angeles, Nashville, Orlando, San Diego, San Francisco and San Jose.