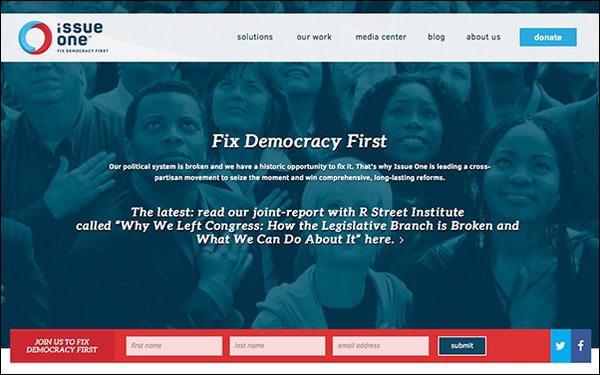 Called The Firewall, the digital news outlet is expected to cost $2.5 million in the first two years. Hawkings will serve as editor-in-chief of The Firewall and Meyers as publisher-executive editor.

Though The Firewall will not officially launch until next spring, the duo are building out a team from its eight-person staff.

The publication is supported by the Hewlett Foundation, a private foundation created by Hewlett-Packard cofounder William Redington Hewlett, his wife, Flora Lamson Hewlett, and the Bridge Alliance Education Fund, a network of over 90 organizations across the political spectrum focused on “revitalizing
democratic practice in America,” according to its website.

The Firewall will be editorially independent from Issue One and its funders. It will cover political reform issues and efforts at the local, state and national levels, via original reporting, profiles, videos and opinion pieces.

“We are launching The Firewall at a time of intense interest in fixing our country’s political system,” stated Issue One’s CEO Nick Penniman. “Across the country, Republicans, Democrats and Independents are
fighting to make our democracy less tribal, elections more competitive, policy-making more effective.”

Last election season, nearly 24 reform initiatives passed at the state and local levels, according to the organization. “So much of today’s media coverage is focused on politicization of debate that the core underlying issues go underreported. We aim to change that,” stated Meyers, most recently vice president of business operations, CQ Roll Call.

Penniman said The Firewall will help audiences learn about the “political initiatives and efforts in their own state and at the national level.”

“A career spent decoding policy and politics for the voters has made me passionate about the need for more clear-eyed, unbiased reporting,” Hawkings stated. Previously, he was recently senior editor of CQ Roll Call.