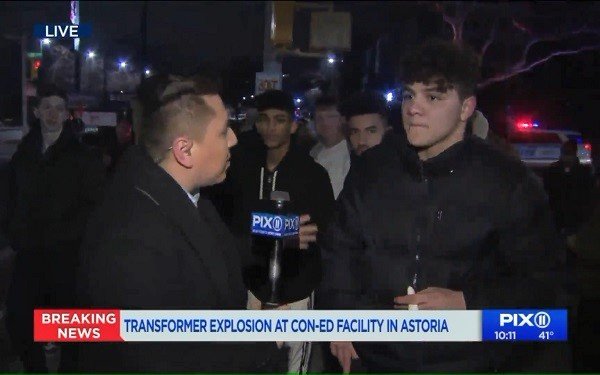 On one station, a man who heard the power plant explosion Thursday evening that lit up the night sky over New York City dutifully reported to the station's on-the-scene correspondent that he was on the toilet at the time of the explosion.

On another station, a young man just behind a reporter doing a live shot from outside the power plant suddenly leaped into the shot and proudly brandished the middle fingers of both hands, a gesture seen by everyone tuning in for news of this mysterious nighttime light show.

It was all in a night's work for New York's local TV news crews who scrambled to report this story that broke at around 9:15 in the evening.

These two stations in particular -- Ch. 5 (Fox) and Ch. 11 (Tribune) -- were challenged to figure the whole thing out and get their news crews out to the scene with just 45 minutes to spare before their 10 p.m. newscasts.

When the newscasts came on at 10, the result of this scrambling were a lot of live shots and person-on-the-street interviews, but almost no actual information about what had happened.

All the startled populace knew about this peculiar event was this: At around 9:10 or 9:15 p.m., the dark night sky over New York brightened to a degree that was not quite daylight but a brighter shade of blue than the purple-black of a nighttime sky.

Millions of city dwellers apparently saw this sudden change in the color of the night sky, and many of them had a view of its source from vantage points in Queens, Manhattan and the Bronx.

A very wide, bright light, accompanied by thick smoke, was visible for miles on the horizon of northeast Queens, site of a Con Edison power plant, but also LaGuardia Airport a short distance to the east, Rikers Island (the city's vast jail complex) and the Steinway piano factory nearby the power plant.

Anyone with a general knowledge of that area would wonder if the power plant had exploded, the Steinway factory was burning, a riot had broken out at Rikers or an airliner had crashed at LaGuardia.

It was easy to be frightened by the breadth of this light and smoke show. Having lived through the terrorist attack on the World Trade Center on September 11, 2001, many New Yorkers reasonably wondered if this event was another attack.

Then the bright light and smoke suddenly disappeared after five or 10 minutes. Naturally, city residents then sought information from local news sources.

But there was no information -- no bulletins on 1010 WINS, the all-news radio station, no Breaking News alert on the city's local all-news cable channel known as New York 1, and no sudden reports breaking into the prime-time network shows on the city's various network affiliates.

It took some time for New York 1 to get on this story, and when it did, its coverage consisted chiefly of a phone conversation between an in-studio anchor and one of the channel's correspondents who happened to live in the area closest to the blast, in the Astoria section in northeast Queens.

As a source for information, this interview was inane, with the reporter, who seemed to still be in her apartment, speculating on the blast (which later was identified as twin explosions in two transformers at this vast power plant) and its consequences.

She even surmised that the blast would cause power outages at LaGuardia, thus delaying flights in and out of the airport, although she seemed to have no real information about this.

At 10 p.m., Ch. 5 and Ch. 11 came on to do their own reports. At one point on Ch. 5, the in-studio anchor team went to a live shot of one of the station's reporters at LaGuardia Airport and asked him how the incident was impacting the airport.

He said he didn't know because he had just gotten there. Meanwhile, the airport's lights were all on and people walked by and around him, indicating everything was fine.

Another Ch. 5 reporter did a stand-up on a sidewalk on the Upper East Side of Manhattan where no view of the power plant was possible. Her story added nothing to anyone's knowledge of what happened.

Then there were the stand-ups outside the power plant gates in which the man seen in the screen grab above told Ch. 11's reporter that he was sitting on the toilet at the time of the blast, and also the middle-finger brandishing that took place at around the same time on Ch. 5.

In the end, little was gained by any of the coverage, possibly because Con Edison provided almost no information about it, despite frightening half the city.

What can we learn from this incident? That the notion that we live in an information age is often overblown. Despite the existence of the Internet -- which was once promoted as an information superhighway -- information on so many things, even something seen literally by millions, can still be difficult to come by.