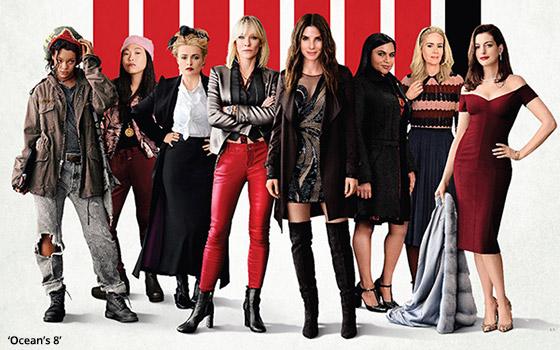 Theatrical movies seem so old school. Can’t they be more convenient, say, watching at home or on a phone?

Traditional moviegoers and especially younger film watchers will turn out for a “Black Panther,”  “Crazy Rich Asians” or movie franchises that look to shift their dynamics -- say, “Ocean’s 8” featuring an all-women cast.

All are part of the reason for the U.S. theatrical movie business hitting record revenues this year: $11.5 billion, with a just a few days remaining in 2018.

Beyond transforming movie genres, movie executives say another key difference this year is expanding the industry's reliance on just the two big moviegoing times of the year: the summer and end-of-the-year holiday periods.

The lower ticket sales are partly due to media alternatives, including movie-watching customers who would rather screen films at home via their ever-larger TV screens. Netflix, Amazon’s Prime Video or others will continue to ramp up movie and TV-producing content for their digital TV platforms.

Netflix had been insisting that a movie it produces should be available to its TV members at the same time it starts in theaters, but theater owners resisted. The story doesn’t end there. Expect Netflix to continue pushing movie release dates closer to those two windows -- especially for niche movies.

“Roma” is one of the many small-budget films that can go this route. But bigger franchises, action adventure or animated movies? No way. Theatrical movie-screen owners will have none of it -- at least not for many years to come.

But what about those individual ticket sales at movie theaters? Theater owners can expect more weakness with more declines -- which means pricier hikes for tickets, along with more expensive movie-theater popcorn.

At home, you can save on snacks -- old school. There’s your movie convenience.