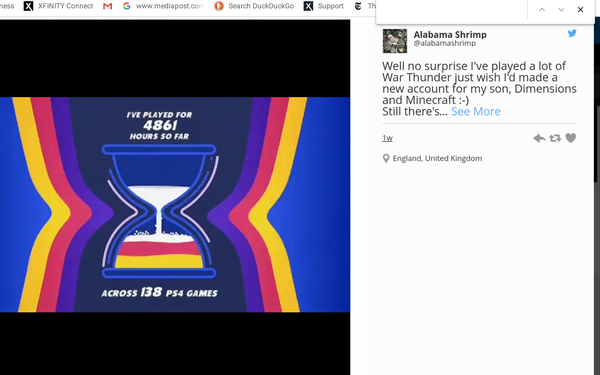 At about this time every year, people reflect on their accomplishments and disappointments so far —  either sadness or euphoria, as Billy Joel once put it.

For users of the PS4 gaming console, Sony has slicked up the accounting process this year. It is offering players “My PS4 Life,” a video chronicle not just of their gaming experience in 2018 but since the first time they ever used the PlayStation device.

Visitors to the game player site are invited to “Take a look back over the games you’ve played, the trophies you’ve earned, and create a unique video that’s all about your PS4 life.”

PlayStation is not alone in this idea. Spotify now offers "Your 2018 Wrapped" --  “because no one listened exactly like you.” Netflix compiles a list of what you’ve watched you can access via “My Profile” — but you can’t make a video out of it.

But PS4 allows you to do so. Clicking on “create my video” gets the process moving, as the data is compiled— which could take 24 hours. But while in the neighborhood, a player can watch a video of PS4’s own accounting of what its subscribers have accomplished over the last five years, like “You defeated 18 million enemies in Astro Bot Rescue Mission” and “1.4 million of you fully upgraded God of War’s Leviathan Axe.”

After collecting personal information, “My PS4 Life” brings it back to you, with a personalized (but anonymized) video of your own gaming accomplishments shareable with pals.

A sample is “I’m RoskoAK863 and this is my PS4 Life.” The video, with an array of accompanying graphic shapes, begins, “My first PS4 game was Contrast and I didn’t stop there.” Another graphic, with a hourglass graphic, continues, “I’ve played for 3354 hours so far across 416 games.” Then it describes the trophies won: “My rarest trophy is Wu Xing King Shaq Fu A Legend Is Born. Only 9 players have earned this one.”

These specially commissioned thumbnails of users -- obviously requested by the user, not some third party -- nonetheless compile a quick little snapshot for PlayStation too, which it discloses at the start. Getting a PS4 Life video  “will also opt you in to our marketing emails -- but you can opt-out at any time by clicking ‘Unsubscribe,’ “ users are told.

PlayStation’s This Is Your Life approach differs just a little from Microsoft Xbox’s “Year in Review,” which takes a smaller snapshot “pulled from billions of data points to deliver a unique dashboard experience for each and every gamer in our Xbox community.”

The PS4 Life video is getting some rave notices.

A reviewer on PowerUp-gaming.com comments, “It’s a nifty little service from PlayStation.” Adding detail, he writes, “I was surprised to learn that my first PS4 game was 'Assassin’s Creed Black Flag.' Even more surprising was the total number of hours I’ve spent with my PS4; 5462 hours. That’s 227 days or seven months. Pretty impressive given the console was released five years ago.”

Yes, that’s more than half a year spent gaming.

That’s the problem a writer for Endgadget mentions: “If there's an issue, it's simply that the stats might show you more than you care to see,” he writes. “Do you really want to know how many hours of your life were spent in ‘Call of Duty’ matches? In some cases, it might serve more as a reminder to take a break than a celebration of your gaming prowess.”