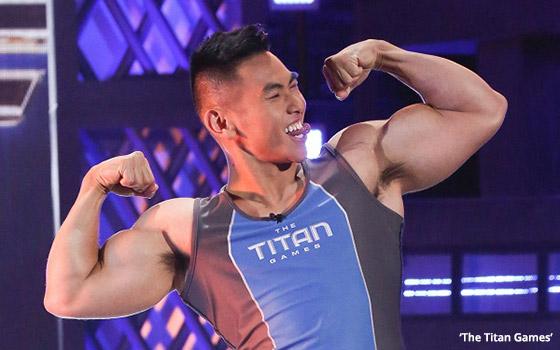 The broadcast networks are starting the new year by expanding their portfolios of outlandish prime-time game shows and competition shows.

First up was “The Masked Singer,” which premiered Wednesday night on Fox (January 2), in which celebrities in ridiculous costumes came onstage to sing and dance, and then a panel of other celebrities were challenged to guess their identities.

On Thursday night (January 3) comes “The Titan Games” on NBC, featuring Dwayne “The Rock” Johnson hosting an array of muscle-bound Americans from all walks of life (such as the one pictured above) who will compete in all manner of creative feats of strength.

Like so many of TV's reality- and talent-competition shows, this one relies on the heartwarming, inspirational stories of these rough and ready, athletic aspirants who nevertheless are seen weeping openly when they receive a call from The Rock to tell them they made the cut to appear in the show.

Tales of struggle, hardship and woe, followed by a chance at redemption on prime-time TV: That's what life is all about these days, right?

And on Tuesday night (January 8), NBC will mount the second-season premiere of “Ellen's Game of Games,” hosted by Ellen DeGeneres.

Note the title “Game of Games,” which seems composed to suggest that this show is not merely a game, but the game show to end all game shows.

It is a Barnum-esque position to take that begs the question: Once a network has aired the “Game of Games,” how on earth can it ever air another one? The title suggests that no network could ever top this.

Speaking of exaggeration, CBS is joining the fray of overblown, over-dramatized talent-competition shows with a new entry called “The World's Best,” which will premiere following the year's most over-the-top televised event -- the Super Bowl on CBS on February 3.

Really? “The World’s Best”? These contestants will really be the best in the entire world? That is quite a claim to make, not to mention quite a lot of responsibility to hand to this show's panel of celebrity judges -- RuPaul, James Corden, Faith Hill and Drew Barrymore.

The sudden influx of these new, noisy competition shows -- with their flashing lights, loud music, overexcited studio audiences and other assorted fireworks -- seems to represent a new effort on the part of network television to compete with the subscription streaming services that are drawing viewers away from linear TV by the millions.

Reality competition shows -- ranging from “American Idol” (formerly Fox, now ABC) and “The Voice” (NBC) to “The Bachelor” (which starts its 23rd edition January 7 on ABC) -- represent a genre of television that the streaming services such as Netflix, Amazon and Hulu have not yet swooped in to do on their own.

The networks must believe that when it comes to producing this kind of content they have a leg up on their streaming-service competitors because the networks have been making these shows at least since 1999, when ABC first launched “Who Wants to Be a Millionaire,” and 2000, when CBS launched the first “Survivor.”

As prime-time television attractions, these competition shows will displace many hours the networks might have otherwise been challenged to fill with one-hour dramas -- which happens to be the category in which the streaming services are making the deepest inroads (along with original documentaries, made-for-streaming movies and comedies, and almost every other kind of television content, except strong-man and strong-woman competitions such as “The Titan Games”).

Unfortunately, when the networks present prime-time lineups that are loaded up with this kind of cacophonous content, they risk turning their prime-time hours into the equivalent of a televised circus.