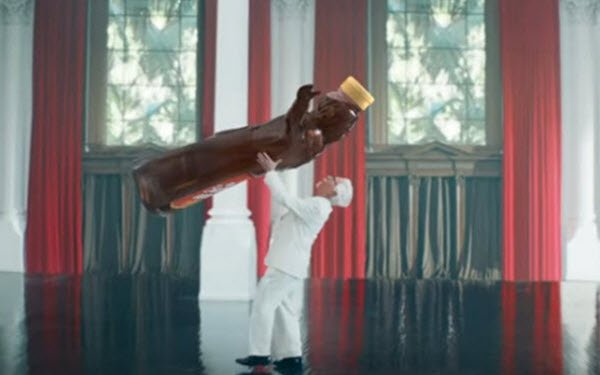 My years of covering food, beverages and restaurants for Marketing Daily have confirmed that several buzz-driving campaigns will inevitably make the top 10 best-read stories among these categories.

But the specific campaigns or ads that most grab readers’ fancy are often surprising.

In 2018, the ad story that outpulled all others was a clever, amusing homage to “Dirty Dancing” from KFC and Wieden + Kennedy Portland (“The Colonel And Mrs. Butterworth Do 'Dirty Dancing' Proud").

But why were marketers so intrigued by “Apolo Ohno Goes for Hershey’s Gold”? Was it the news value of Hershey launching a chocolate-less product, which also marked just the fourth new candy bar under the Hershey name in the company’s history? Was it Ohno fever? Safest guess: It was both.

(Hershey’s also scored a lot of positive attention by making #2 in this year’s “Most Loved Brands in America” ranking from Morning Consult — outranked only by Google.)

As usual, some campaigns attracted readers largely because of their tech or partnership innovations.

The launch of V8 +Hydrate would no doubt attract interest on its own, but the fact that Campbell chose to make this its first (at least initially) all-ecommerce product launch sealed the deal.

Another popular article detailed Cheerios’ harnessing of Walmart’s giant retail clout in a promotion that extended its highly successful, long-running “Good Goes Around” national campaign with local experiences and donations.

Particularly well-read articles that reflected responses to the still-mounting pressures on big food and beverages companies included coverage of Mondelez’s decentralizing via regional CMOs and tapping Danone exec Martin Renaud as its new global CMO, and a piece on Kraft Heinz’s launch of a $100-million food-tech venture-capital fund.