Everybody Looked Bad In Border-Wall Tit For Tat On TV 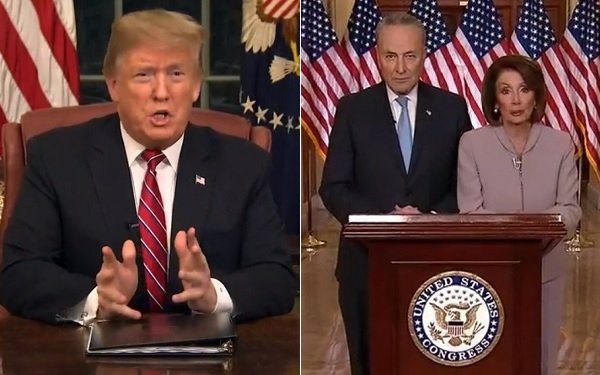 Is “screencraft” a word? If it is not, then let it now be a word from this day forward.

This new construction came to mind while watching the dueling speeches Tuesday night on TV that were delivered first by President Trump and then by the Democrats’ tag team of Sen. Chuck Schumer and Rep. Nancy Pelosi, Speaker of the House of Representatives.

Inspired by the word stagecraft (which is a word recognized by dictionaries), screencraft refers to the art or skill of composing an attractive picture within the borders of a television screen.

For their presentations Tuesday night, the president and his two opponents -- along with whoever designed the settings they were seen in and/or coached them on their deportment -- all get F’s, even if the worst of the two was the Democrats’ response to Trump's speech.

While watching Pelosi and Schumer, after first enduring Trump for 20 minutes (approximately), it was reasonable for viewers at home to form the impression that the so-called leaders of our country and its government are not up to the job.

On TV, the opposing sides engaged in a frustrating “dialogue of the deaf,” as The Wall Street Journal described this unhappy and wholly discouraging television viewing experience in an editorial on Wednesday morning.

Let's start with the Democrats’ tag team approach to delivering their response. When Schumer and Pelosi first appeared together before that podium, you could almost hear a collective “uh-oh” emanating from neighboring houses and apartments.

This ill-chosen format meant that one half of this pair would be made to stare silently and stonily into space, directly into the tired eyes of the people they are supposedly governing, while the other one angrily stamped his or her feet and basically issued a firm no to the border-wall funding Trump wants.

Schumer and Pelosi each said essentially the same thing and delivered these messages in much the same way. It is likely that the only reason both of them were there was because they each wanted to deliver this response, and neither would agree to let the other go it alone.

Or maybe they wished to present a united front of some sort, even though Schumer, as minority leader in the Senate, does not represent the will of that body.

Whatever the case, on TV Tuesday night, they looked dour, angry and, dare I say, aged and tired -- as if both of them had become irritable from being made to remain standing and on their feet longer than they are used to.

The setting in which they delivered their joint response was also ludicrous -- a corridor with an array of flags in the background and a podium with a seal of the United States Congress that looked so woeful I thought someone had made up this “seal” on their PC earlier in the day and then printed it out. (It turns out Congress does have an official seal -- I looked it up.)

This end-of-the-corridor lectern setting was similar to the setting in which President Barack Obama made various public statements from the White House, when not using the Oval Office for that purpose.

Maybe the Democrats wanted their two congressional leaders to appear “presidential,” as a way of counteracting the image of power the President would project from his desk in the Oval Office.

On that subject, at least President Trump had the good sense to deliver his portion of the evening's entertainment from a seated position behind a desk.

It was a more personal, “one-on-one” approach that may have made some viewers feel that he or she was sitting on the other side of the desk.

It was certainly a more intimate scenario than having the two Democrats stand behind a lectern and deliver a stern lecture whose theme was refusal and little else.

For his part, the President has a way of breezily citing so-called facts and figures that he seems to conjure out of thin air. With him, it's always “thousands” this and “hundreds” that. Heaven knows if any of it is true.

In the end, viewers were left with an image of their government in Washington suffering under severe dysfunction. So what else is new?

government, politics, tv
2 comments about "Everybody Looked Bad In Border-Wall Tit For Tat On TV".
Check to receive email when comments are posted.
Read more comments >
Next story loading