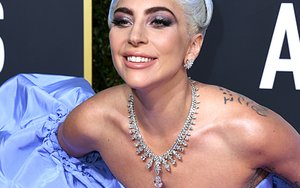 Lady Gaga sparkling in 100 carats at the Golden Globes isn’t the only news from Tiffany & Co.: The fabled jeweler says that to address growing consumer concerns about the ugly origins of many minerals, it will now disclose the provenance of all its diamonds.

With the Diamond Source Initiative, Tiffany will offer 100% geographic transparency, a first in the industry, and a big step beyond the now-standard industry practice of using conflict-free minerals.

Each one of its individually registered diamonds -- 0.18 carats and larger -- will get a unique “T&Co” serial number. While the laser etching is invisible to the naked eye, it will tell consumers where the gem came from.

Tiffany, which has already had a leading role in providing conflict-free diamonds, says information about a sparkler’s provenance, by region or country, is the next step in responsible sourcing.

“The Diamond Source Initiative will be shared in each of our Love & Engagement caselines in our more than 300 stores around the world, alongside a selection of diamond rings with their individual provenance clearly displayed, ” a Tiffany spokesperson tells Marketing Daily.

The company is also running a full-page ad in the New York Times, as well as a video on Instagram and its website. The spokesperson says marketing emails have been sent to customers, as well, “as a special CEO message.”

In addition to identifying the country or region the diamond came from, beginning this quarter, by next year Tiffany plans to also include information about the craftmanship of its jewelry, letting buyers know where the stones are cut and polished.

Consumers, particularly the millennials most likely to be buying engagement rings, have become increasingly aware of the diamond industry’s dark past, including “blood” or “conflict” diamonds used to fuel insurgents; widespread labor abuses; and poor environmental practices.

Many jewelers, including diamond giant De Beers, have responded by introducing synthetic, or lab-grown, diamonds.

But the spokesperson says that’s not a road Tiffany is likely to travel anytime soon. “We do not believe that lab-made diamonds are a luxury product -- and, as such, we do not intend to use them in our jewelry,” he says. “Diamonds are a romantic symbol billions of years in the making, with an intrinsic value far beyond their chemical makeup.”

He adds that the company believes natural diamonds provide a critical economic opportunity and that countries like Botswana rely on the diamond business. “We believe we have an opportunity to make, and are making, a positive impact for local communities by purchasing responsibly mined rough diamonds and cutting them in our own workshops around the world.”

Oh, and about those Lady Gaga baubles? The performer, who is a spokesperson for Tiffany, wore the Tiffany Aurora Necklace, made of 300 sustainably sourced Tiffany diamonds, including a 20-carat pear-shaped gem at the heart of the necklace. The custom-made piece was designed to complement her dress and make a splash at the first awards show of the season.