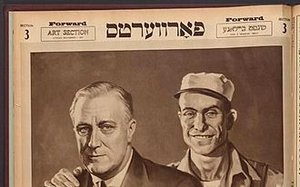 The Forward, the 121-year-old Jewish-American news publication, which originally began publishing a Yiddish-language daily newspaper in New York City in 1897, is suspending its print edition.

The news, which was reported by the New York Post, comes a year after The Forward dropped its weekly print edition and began publishing in print monthly.

NYP also reported The Forward is laying off about 40% of its editorial staff, including its Editor-in-Chief Jane Eisner.

The Forward, which was originally known as Forverts, the Yiddish word for forward, first began publishing an English-language edition in 1990.

The publication has experimented with a variety of formats and publishing models. It has operated as a not-for-profit with a healthy endowment created by the sale of its New York radio station WEVD to Walt Disney Co.’s ESPN division in 2004.

In its heyday in the 1930s, the Yiddish-language edition had a circulation of nearly 300,000. Earlier in its storied history, the Jewish Daily Forward boasted a readership larger than The New York Times.

The newspaper once distributed 11 local and regional editions, reaching as far west as Chicago.