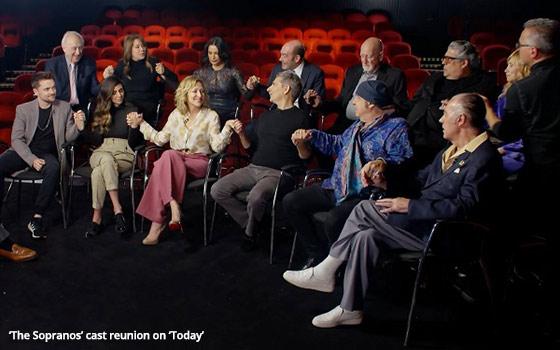 It is not easy to develop and then produce a TV show, particularly one of such high quality as “The Sopranos.”

I learned this in a courtroom in Trenton, New Jersey, in December 2007, some six months after “The Sopranos” had its infamous finale on HBO, in June of that year.

“The Sopranos” was briefly in the news last week when “The Today Show” staged a reunion of cast members (pictured above) to mark the 20th anniversary of its premiere on January 10, 1999. Yes, it has been 20 years.

In addition to demonstrating how fast time flies, this anniversary revived memories of what it was like to be a TV columnist in New York in the “Sopranos” era.

It was the show everyone talked about, so I glommed onto it -- to the tune of more than 80 bylined stories and opinion columns published from September 1999 (covering the first Emmy Awards in which “The Sopranos” was up for various awards) to December 2007 in the newspaper where I then worked.

December 2007 was the month the show's creator, David Chase, had to defend himself in federal court in Trenton against a man named Robert Baer, a New Jersey lawyer who sued Chase because, Baer alleged, it was he who gave Chase the idea for making a TV drama series about the north Jersey mob.

Baer's belief in his own role in the creation of “The Sopranos” stemmed from meetings he held with Chase over a three-day period in 1995 in which Baer shared with Chase what he knew about the mob culture of Union County in northern New Jersey.

Baer also introduced Chase to various local sources in and around the city of Elizabeth who took Chase on automobile tours of the area in which they would point out pork stores and other locales where mob figures were alleged to have made their headquarters, and other mob landmarks, real or imagined.

Years later, when Baer heard about the “Sopranos” TV show, he remembered those meetings and believed them to be significant enough in the creation of the show that he sued.

When the case came to trial, the paper assigned me to cover it -- a very unusual assignment for a desk-bound TV critic. But it was one of the most interesting three days I ever spent in my profession.

This trial was not a blockbuster. I attended in the company of a reporter from my paper who was assigned to write the blow-by-blow, you might say, while I was assigned to write an accompanying color piece each day. Our main competition -- New York’s other tabloid -- sent one reporter, and there were few others, if any, in a courtroom that was largely empty.

As a journalist on the TV beat, I found the case fascinating because Chase's attorneys had designed a defense that would consist chiefly of Chase describing in detail, over several hours on the witness stand, how this notorious TV show came to be.

Their aim was to present a motherlode of testimony from Chase that would demonstrate that creating a show of this type required so much experience, persistence and plain hard work -- almost all of it undertaken by Chase in a process that lasted years -- that it would demolish Baer's claim that his role amounted to “co-creating” the show.

Chase's testimony and Baer's own cross-examination of him (Baer was acting as his own attorney) further demonstrated that Baer had so little knowledge of the ways in which TV shows are made that his claim to be a co-creator was not sustainable. He lost the case.

But within Chase's testimony were a handful of gems that I have never forgotten (especially since I still possess my stories from the trial).

At various times, Chase described how the concept for “The Sopranos” changed and evolved over time. Finally, he arrived at the show's premise: A middle-aged mob boss in therapy because he suffered from anxiety attacks stemming from an over-bearing mother -- the premise that was the foundation of the entire show.

So, as show creators with powerful agents do, Chase made the rounds of all the broadcast networks to pitch this idea. None of them said yes, but CBS's reaction, according to Chase's testimony in this trial, was one for the ages.

CBS was first to hear the pitch, in August 1995 -- before Chase ever met with Baer, as a matter of fact.

According to Chase, an unnamed CBS executive had this reaction to the concept for a show that would eventually become one of the most storied in the history of television: “I don't have any problems with the murders and the robberies,” this exec said, “but does he have to be in therapy?”

At another point in his testimony, Chase -- a man who had spent more than 10 years developing and then writing and producing TV's best-known scripted drama series about organized crime -- admitted, with admirable candor: “To this day, I don't really understand the business of the mafia.”

As for his decision to bring the show to a close earlier that year, Chase gave one reason, of many, why the show came to an end. Said he: “After seven years of making the show, we had run out of Italian actors.”