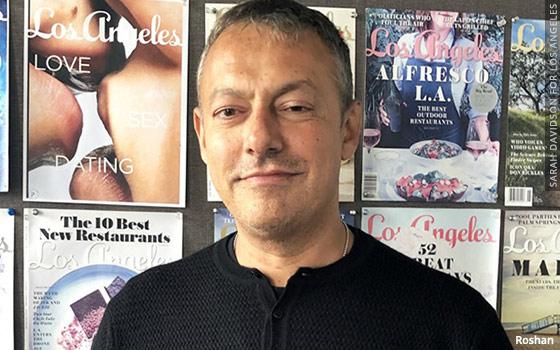 Maer Roshan is the new editor-in-chief of Los Angelesmagazine and LAmag.com.

“L.A. has overtaken New York to become the most dynamic and influential city in America,” stated Roshan. “It’s at the forefront of politics, tech, business, food, art, and fashion.”

He says he is excited to “create a magazine as smart and stylish and provocative as the city it’s named after.”

Roshan served as deputy editor of New York for nearly seven years in the 1990s, and oversaw the magazine’s Intelligencer section. He was editorial director of Talk, where he oversaw double-digit circulation gains in his first year.

He is also the founder of pop-culture magazine Radar, which folded in 2008, as well as gay newsweekly NYQ, iPad magazine Punch!, and addiction and recovery news site TheFix.com.

Most recently, he was editor of FourTwoNine, a gay lifestyle quarterly based out of L.A., where Roshan relocated from New York five years ago.

Roshan told the Los Angeles Times: “There used to be a time when New York and D.C. were setting the agenda, and I think it’s undeniable that the pendulum has really swung west."

A number of staffers left after the sale, including then editor-in-chief Mary Melton, editor at large Amy Wallace, publisher Erika Anderson and head of digital strategy Audie Metcalf Ruyle.

Matt Segal stepped in as editor after Melton stepped down, but left Los Angeles after 20 years in August.

Roshan is the ninth editor in the magazine’s 56 years; Los Angeles claims to be the longest-running city magazine in the country.