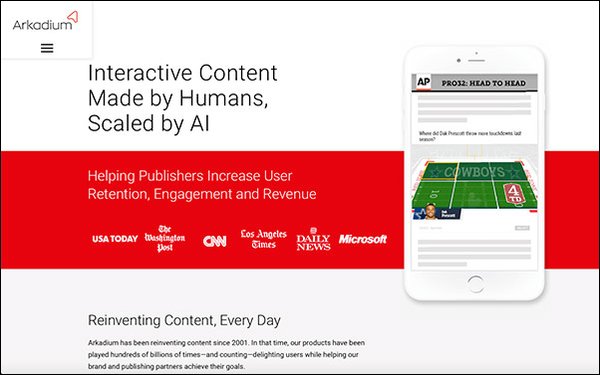 The partnership provides Arkadium with a way to expand globally and break into the online betting through access to Sportradar’s well of data for AI, a sales team quipped to expand AI globally and more advertising opportunities.

Additionally, bookmakers will be able to run ads across Arkadium’s AI games, allowing Arkadium to tap the sports betting market.

Through its partnership with Sportradar, Arkadium noticed a lot of interest coming from its EU-based publishers looking for new betting opportunities. As sports gambling becomes more mainstream, Arkadium saw an opportunity to be at the forefront of the movement with its U.S.-based publishers.

In the exclusive agreement, Sportradar and Arkadium will create factives for English Premier League matches and UEFA Champions League matches in numerous languages, in addition to the NBA, NFL, MLB and NCAA football and basketball.

Ads run through the partnership will be similar to Arkadium's current ad offerings, which support categories like retail and auto-branded factives across publishers’ sites. Publishers receive a portion of the spend.

In a pilot program of its InHabit advertising software, fashion retailer DXL showed an average of 21.6 second dwell time, in addition to in-target engagement of 90% across DXL’s core demographic.

Jonathan Earle, customer director of sports media for Sportradar, stated: “The way in which sports fans are consuming content has dramatically changed, and fans are looking for more interactive, visual stories to help keep them informed of the latest sports news. Partnering with Arkadium will help us to lead the next generation of sports engagement.”