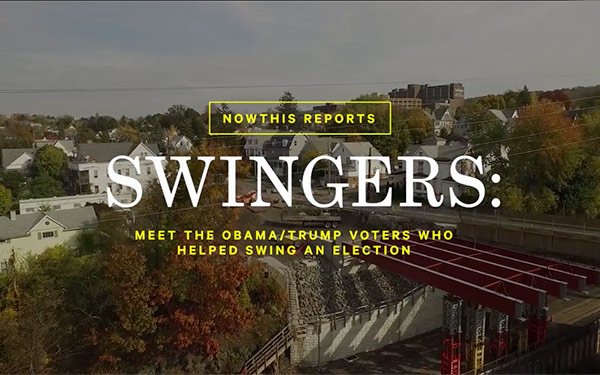 NowThis has premiered a new docu-series for social platforms on swing voters.

Created in partnership with Abigail Disney of Fork Films and Patriotic Millionaires, the series, called “Swingers,” looks at the lives and reasoning of Obama voters who chose to vote for Donald Trump in 2016 in the key swing state of Pennsylvania.

“ 'Swingers' is the first of many upcoming projects which will highlight the key issues that matter most to young people as we head into the general election,” NowThis Chief Content Officer Tina Exarhos stated.

In the series, the voters cited issues like the economy, jobs and immigration as the reasons for their flip.

Over 9 million Obama voters went for Trump in 2016.

The series will also follow these voters into the 2020 campaign season and their voting preferences.

“This set-up gives viewers an extraordinary opportunity to observe how some of their fellow citizens make their political decisions,” stated Fork Films founder Abigail Disney.

This isn’t NowThis’s first docu-series. “Home Team” chronicled the creation of a new professional sports franchise, the Vegas Golden Knights, and its role within the community in the aftermath of the Las Vegas shooting in October 2017.