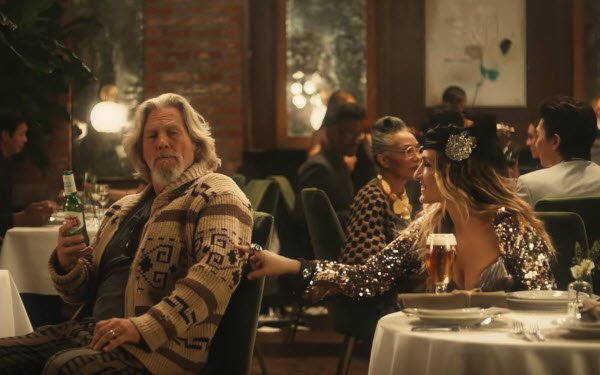 Last week, Stella Artois began promoting “Pour It Forward,” the latest extension of its cause-related clean-water partnership with Water.org, with a “Sex and the City” homage video starring Sarah Jessica Parker herself.

Now, the Belgian beer brand has announced that it will run a Super Bowl ad that features Jeff Bridges recreating his cult-hero pothead character “The Dude,” as well as SJP recreating her “Carrie Bradshaw” character.

The 45-second ad (below), from Mother New York — in which SPJ and Bridges choose a Stella over their characters’ usual favorite drinks (a Cosmo and a White Russian) — will air during the game’s second quarter.

The actors are promoting the partnership’s current offer: For every Stella bottle purchased between now and March 31, the brand will donate a month of access to clean water to someone living without it.

The ongoing partnership also pledges six months or 12 months of clean water for a person in the developing world for each Stella six-pack or 12-pack purchased, respectively.